Insight #255 – Who Can Partake Communion? 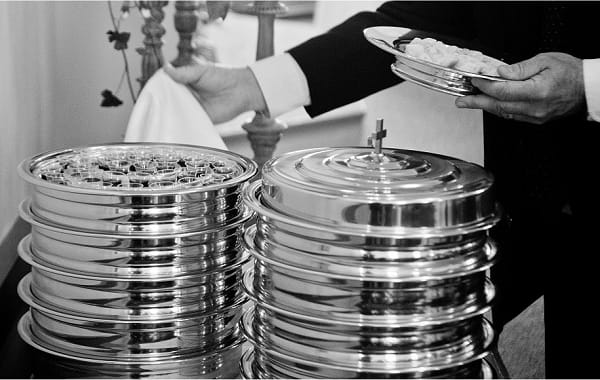 Who can receive communion? Who can partake of the bread and the cup of the Lord’s Supper? Can visitors? Can everybody, anybody? Should communion be “open” or “closed”?

On one hand, there is the practice of asking all visitors to leave, and then serving the Lord’s Supper to the members who remain. On the other hand, there are those who will announce before the emblems are passed: “It is the Lord’s Table. We neither invite nor debar.” Which practice is correct? Or is there a better way somewhere in between these two extremes?

Scripture nowhere directly addresses this question. But neither does it lack principles that can give us guidance. First of all, in the NT, it is always the Christians who are partaking. When first mentioned in Acts 2:42, “the breaking of bread” is one of four items that “they were continually devoting themselves to.” And who are “they”? The preceding verse tells us: “Those who had received his word were baptized; and that day there were added about three thousand souls.” Thus, in this initial instance, the communion is something that baptized believers were doing.

Both texts speak of the breaking of bread, the Lord’s Supper, as being something the Christians are doing, something for the church. What if visitors are present in the assembly? That issue, as I have said, is not directly addressed. However, there are several things mentioned, especially in the well-known verses beginning with verse 23 of 1 Cor. 11, that can help answer the question.

From among various considerations, let’s zero in on what is perhaps the strongest and clearest point: “A man must examine himself, and in so doing he is to eat of the bread and drink of the cup” (vs. 28). Self-examination. How can a person who is not a Christian come out fine in a self-examination? He and she are still in their sins. They have not sought for the blood of Christ to blot out their sins in repentance and baptism. They have not yet yielded their lives to Jesus. They have not committed themselves to following Him in the way the NT ordains. They may not realize all this, in which case they do not even know how to examine themselves. Someone will say, well, it says that each person is to examine him/herself. However, in the context we have seen that it is members of the church in Corinth who are to examine themselves. Outsiders are not being considered.

No one comes to the table without sin, of course. But is the Lord’s Supper a place for the sinner to obtain forgiveness? Jesus said, “He who has believed and has been baptized shall be saved” (Mark 16:16). Peter, baptized with the Holy Spirit, said, “Repent, and each of you be baptized in the name of Jesus Christ for the forgiveness of your sins” (Acts 2:38). The apostle Paul taught, “all of you who were baptized into Christ have clothed yourselves with Christ” (Gal. 3:27). When a person is baptized, he/she is clothed with Christ. That same person continues at the Lord’s Table week by week to remain clothed with Christ.

What Then Should Be Done About Visitors?

Without explicit Scriptural teaching or example, it seems to me we should do that which is most beneficial to the visitor. I think none of us would agree to extreme customs that historically have been practiced, such as dismissing all the non-Christians before the Lord’s Supper. Should we in that way or some other way “forcefully” make sure the elements do not get in the hands of the unconverted? Dealing with visitors whom we do not know – and don’t know if they are believers or not – surely we would let them make the decision.

Whatever may happen the first (and maybe only) time a person visits the assembly, many of us would agree that the main thing is to teach the unconverted that they should pass the emblems by. If we invite an unconverted person to the service, it would be well to explain to that person, before attending the first time, that it is for Christians, and they can just pass the elements on to the next person. If someone is not a Christian and it is passed to them and they partake, we do not need to get all upset. But I believe we need to reach out to them at an appropriate time and place.

As Christians, when we know a visitor is not a Christian, do we not have a spiritual obligation to him/her? The only way a non-Christian can come out fine in a self-examination is through ignorance. It is our task to teach them the way. Someone will say that it does the unsaved person no harm to partake because they are already lost anyway, so what difference does it make?

The best example I know is what happened several decades ago. A neighbor of a Christian was attending and partaking without anyone saying anything. The Christian asked my advice. I said to make it an opportunity to teach the visitor. What happened? The visitor said she thought she was fine in taking the Lord’s Supper – and she might have continued “forever” without ever being converted. But because the Christian sat down with her and explained the whole thing, the visitor began to see that she was not right with the Lord. I don’t remember all the details or the length of time involved, but the end result of the explanation was to open the door for Bible studies, and the neighbor was eventually converted to Christ. Praise the Lord!

So, in the case given, by allowing the visitor to partake Lord’s Day after Lord’s Day, she was made to feel fine, a part of the church, in communion with the Lord. That was not good for her soul. By explaining to her why she should not partake, the door was opened for her conversion and salvation. And she is faithful to the Lord to this day. That’s the outcome we want to work toward.