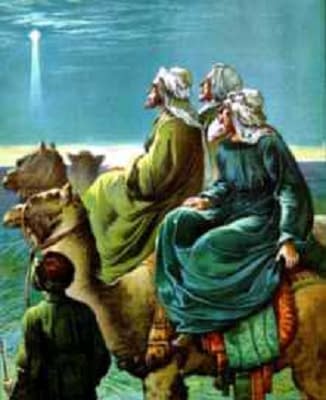 With December well behind us, so that “the spirit of the season” doesn’t interfere with a calm consideration of the topic, let’s consider the famous Magi, who came to visit the baby Jesus.

First, let’s get some false concepts out of the way. How many Wise Men were there? We don’t know. Three gifts, yes, but three gifts could have been given by two men or twenty. Came on camels? Maybe. Were they kings, as in “We three kings of orient are…”? Not at all. Did they come to the manger the night Jesus was born? No way. Matt. 2:10-11 says, “After coming into the house they saw the Child with Mary His mother.” The house, not the stable. When did they arrive? It’s a matter of harmonizing Matthew with Luke.

Luke 2:22-24 tells of Mary and Joseph taking the baby Jesus to Jerusalem to perform the rites commanded by Moses “for their purification according to the law of Moses.” Compare this context with Lev. 12. Mary’s purification would have been 40 days after Jesus’ birth. Forty days is not enough time to include the visit of the Wise Men, the flight into Egypt, and the return from Egypt. In addition, when the family arrived back in Israel, God warned Joseph not to go into Judea, where both Jerusalem and Bethlehem were located. So they returned to Nazareth. Putting all this together, the visit of the Wise Men had to be after the presentation in the temple, at least six weeks after Jesus’ birth.

Who Were These “Wise Men”?

We commonly call these men the “Wise Men,” with capital letters. Some Bibles choose rather to transliterate the Greek word into English as “magi.” This is the plural form of “magos,” which one Greek authority defines as “the name given by the Babylonians (Chaldeans), Medes, Persians, and others, to the wise men, teachers, priests, physicians, astrologers, seers, interpreters of dreams, augers, soothsayers, sorcerers, etc.”

This makes us think of the prophet Daniel, who six centuries earlier, was among “the wise men of Babylon” (Dan. 2:12, ff). In Dan. 2:27, wise men, conjurers, magicians, and diviners are listed together. In the Septuagint (Greek translation of OT), “magos” appears often in connection with Daniel. And Daniel 5:11 says that Daniel was made the “chief of the magicians, conjurers, Chaldeans and diviners.” Chief of the magi.

On Pentecost A.D. 30, among the Jews present in Jerusalem were “Parthians and Medes and Elamites, and residents of Mesopotamia” (Acts 2:9). This means that many Jews still lived in the area where Daniel had lived. It is thus tantalizing to ponder what connection the Magi may have had with Jews in “the east,” and if they were even acquainted with the great prophetic book of Daniel. We know not.

We know that God spoke to the Wise Men later, because “having been warned by God in a dream not to return to Herod, the magi left for their own country by another way” (Matt. 2:12). We also know that the star did not behave like a normal star, because “the star, which they had seen in the east, went on before them until it came and stood over the place where the Child was” (Matt. 2:9). No star moves like that nor stands over a specific building. So it was a miraculous star, a divine act of God. We must assume that God originally somehow communicated to the Magi the meaning of this star.

There is much we do not know about these Wise Men, Magi. We do know that they traveled a long way in order to worship a baby! “They fell to the ground and worshiped Him” (Matt. 2:11).

However, the star had not guided the Wise Men immediately to Bethlehem. Because they were somewhat on their own, it seemed logical to go to Jerusalem first, since it was the capital of the Jews.

When Herod heard that the Wise Men were looking for the King of the Jews, he called the chief priests and scribes and “inquired of them where the Messiah was to be born” (Matt. 2:4). Herod knew enough of God’s prophetic Word to equate “King of the Jews” with “Messiah” (Christ). He also figured the Jewish scholars would know where the Messiah was to be born. He was right. The scholars quoted the prophet Micah, and Herod had enough faith to believe the truth of that seven-century-old prophecy. And yet Herod dared to attempt to assassinate the Messiah.

Not so, the Wise Men. The Wise Men were wise men. They sought the infant, not to slay Him, but to worship Him. Worship an infant! How much did these men know? We don’t know. But somehow they realized this infant was unique, He would be King of the Jews and obviously not just any ordinary King.

Jesus was born to be King of the Jews. Thirty-three years later, He died on the cross with the same title over him: “This is Jesus the King of the Jews” (Matt. 27:37). Born King, died King. That, of course, was not the end. It was just the beginning. Scripture tells us that the “Lamb” is “Lord of lords and King of kings” (Rev. 17:14). At his first coming, many mocked him for claiming to be a king. At his second coming, “at the name of Jesus every knee will bow… every tongue will confess that Jesus Christ is Lord, to the glory of God the Father” (Phil. 2:10-11). Worship Jesus now voluntarily in love, or worship Him at the judgment in fear.

Tags:Jesus' Connection to Others
previousInsight #255 – Who Can Partake Communion?
nextInsight #257 – A Fowl Fable (transspecies, transgender)