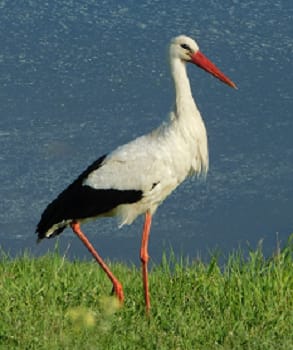 It was a bright sunny day. Susan, the stork, was strolling through the meadow when she encountered Ozzie, the ostrich. Susan, very outgoing, spoke up first, “Hi, there, my name is Susan. I’m so glad to meet another ostrich.”

Somewhat confused, Ozzie responded, “What do you mean ‘another’ ostrich?”

“Now, wait a minute,” cautioned Ozzie. “I’m a little hard of hearing. It sounded to me like you said, ‘Another ostrich just like me.’ ”

“Exactly,” said Susan. “I’m an ostrich just like you.”

“Come on,” retorted Ozzie, a little frustrated. “It’s plain as day you are a stork.”

“Looks are deceiving,” countered Susan. “When I pecked my way out of my shell, the veterinarian assigned my species as stork, and he even wrote it on my birth certificate. The vet is so old-fashioned he thinks a bird’s species can be determined by physically examining its anatomy. Most vets are not abreast of the times. They don’t realize that a bird is speciesless until it is old enough to develop its own internal species identity.  Although I was assigned stork at birth, when I was several months old, my internal species identity was clearly that of an ostrich. Because of this confusion, other birds call me a transspecies bird. It sometimes makes life difficult; you know what I mean?”

“I sure do, Susan, and I’m so sorry for all that confusion. I guess you were just born into the wrong body.”

“I’m so happy you understand,” Susan responded, “so I’ve got an important question for you. I tried over in Birdsville to become a member of the Ostrich Girl’s Club. But those narrow-minded old birds wouldn’t let me in. They demanded that I prove my species by my birth certificate. Do you know any open-minded clubs?”

“I’m so sorry,” sighed Ozzie. “But, you’ll be happy to know that my club is inclusive. We accept birds of all sizes, shapes, and colors, as long as they internally self-identify as ostriches. We don’t practice discrimination. It’s illegal, you know.”

“That’s wonderful,” replied Susan. “I really do identify as an ostrich, even though I’m trapped in this stork body. In fact, I’m scheduled for species-reassignment surgery next week. An unbiased vet is going to clip my wings so I can’t fly. Then I’ll be just like you.”

Isa. 5:20: “Woe to those who call evil good, and good evil; who substitute darkness for light and light for darkness; who substitute bitter for sweet and sweet for bitter!”

Rom.1:24-25: “Therefore God gave them over in the lusts of their hearts to impurity, so that their bodies would be dishonored among them. For they exchanged the truth of God for a lie.”

Rev. 22:15: “Outside are the dogs and the sorcerers and the immoral persons and the murderers and the idolaters, and everyone who loves and practices lying.”

On a secular level, google “The Emperor’s New Clothes” by Hans Christian Anderson. It’s a ten-minute read. Although written two centuries ago, it is as up-to-date as the evening news. After you read it, notice how it enlivens Rev. 3:17-19.