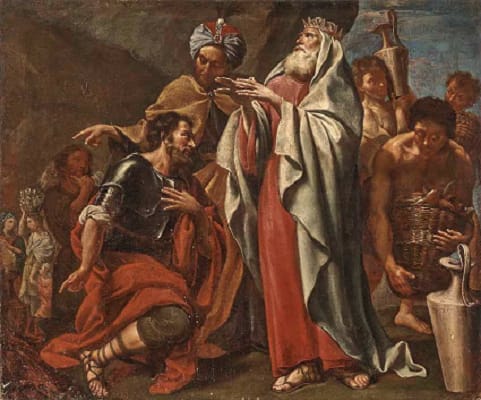 Melchizedek! Who was he? There is more curiosity and speculation about him than three Bible verses might warrant. You would think he would just be another Bible character with a difficult name that few of us paid any attention to.

Genesis 14:18-20 tells us that Melchizedek was king of Salem and priest of God, that he met Abraham with bread and wine and blessed Abraham and God, and that Abraham gave him a tithe of the spoils from a recent battle. That’s it.

Of the few details offered in Psalms, “forever” stands out. Was Melchizedek a normal human being, as he appears in Genesis? Or was he more than human, as “forever” seems to say? Where did he come from? How did he become a priest? Where did he go to? Heb. 7:3 says of him, “without father, without mother, without genealogy, having neither beginning of days nor end of life, but made like the Son of God, remains a priest continually.”

Some believe that Melchizedek was actually the eternal Word of God (Jesus), who took on a human form in Abraham’s time. That may be possible. However, I notice that the text does not say that Melchizedek was the Son of God. It says he was “made like (or resembling) the Son of God.” To me, that is saying that God made Melchizedek a type of Jesus. He was not Jesus but made to look like Jesus. How? Start with genealogy. Genealogies were very important to the Jews. Without a genealogical record, a man could not serve as a priest. As it says in Neh. 7:64: “These sought their register (record) among those who were reckoned by genealogy, but it was not found: therefore were they deemed polluted and put from the priesthood.” For Melchizedek there is no genealogical record, no record of a father or a mother, no record of birth or death.

A most important point in Hebrews is that since Jesus is eternal, His priesthood is eternal. That’s what Psalms 110:4 says: “You are a priest forever in the order of Melchizedek.” The book of Hebrews refers to this verse at least four times, and the “forever” nature of Christ and His priesthood is expressly stated at least four more times, all within chapters 5 to 7.

This great contrast between the Levitical priesthood and Jesus’ priesthood is stated quite clearly in Heb. 7:23-24: “Many, indeed, have been made priests, because they are hindered from continuing by death. But he, because he lives forever, has his priesthood unchangeable.” Praise God! In the OT, they had high priest after high priest after high priest. They all died and had to be replaced. Jesus died, but He arose from the dead and lives forever. Thus, He is priest forever. He needs no replacement. He cannot be replaced!

In Insight #260 we considered the priesthood of all believers, making a few brief references to Jesus being our High Priest.

Being just plain priests is a very different story from being High Priest. Although Jesus is often just called a priest in Hebrews, it is clear over and over that He is not just any priest, but rather High Priest. And, although Psalm 110 just says, “priest forever in the order of Melchizedek,” the statements in Hebrews make it clear that this priest is High Priest. For example 6:20 says, “having become a high priest forever after the order of Melchizedek.” And notice the oft repeated “forever.” This is in the context of “without father, without mother, without genealogy, having neither beginning of days nor end of life.” This excludes humans.

Hebrews stresses that Jesus was made priest via an oath of God. “Inasmuch as he [Jesus] was not made priest without the taking of an oath (for they [Levitical priests] indeed have been made priests without an oath), but he with an oath by him that says of him, ‘The Lord swore and will not change his mind, “You are a priest forever, according to the order of Melchizedek”‘” (Heb. 7:20-21). God will not change His mind. Furthermore, Heb. 5:4-6 adds, “Nobody takes this honor on himself, but he is called by God, just like Aaron was. So also, Christ didn’t glorify himself to be made a high priest, but it was he who said to him, ‘You are my Son. Today I have become your father.’ As he says also in another place, ‘You are a priest forever, after the order of Melchizedek.'” God Almighty with an oath appointed His Son as a High Priest after the order of Melchizedek. No man dares take this honor upon himself.

“Therefore he is also able to save to the uttermost those who draw near to God through him, seeing that he lives forever to make intercession for them. For such a high priest was fitting for us: holy, guiltless, undefiled, separated from sinners, and made higher than the heavens; who doesn’t need, like those high priests, to offer up sacrifices daily, first for his own sins, and then for the sins of the people. For he did this once for all, when he offered up himself. For the law appoints men as high priests who have weakness, but the word of the oath which came after the law appoints a Son forever who has been perfected” (Heb. 7:25-28).

Sinless Jesus is both priest and sacrifice. Priest forever after the order of Melchizedek. No man dares take this upon himself. Jesus is unique, one and only, our all in all. Praise God!