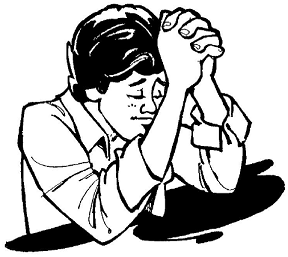 “If you accept God’s message of salvation… You can become a child of God by praying to him right now.” That is a widely-proclaimed road to salvation. Here is an example of such a prayer at the end of a tract by the American Tract Society:

“Dear God, I know I am a sinner and unable to save myself. But I do believe You love me, and that You sent Your Son, Jesus, to die on the cross for my sins. Right here and now, I ask You to forgive my every sin and give me the gift of eternal life. Thank You, dear God, for hearing and answering my prayer, and for giving me eternal life as You promised You would. Amen.”

Before examining the “salvation prayer” and considering the alternative for that prayer, we must clearly understand what is not at issue here—as far as Bible believers are concerned.

Jesus’ blood is not the issue here. Virtually all of us who accept the Bible as the inspired Word of God are in full agreement that “apart from shedding of blood there is no remission” (Heb. 9:22).

Grace is not the issue here. The majority of us who accept the Bible as the only authoritative divine doctrine agree that apart from the grace of God there is no salvation. Man cannot save himself: “All have sinned… being justified freely by His grace” (Rom. 3:23-24). Salvation cannot be earned by anyone.

Faith is not the issue here. Who would argue with one of the best-known verses in the Bible? “For God so loved the world, that he gave his one and only Son, that whoever believes in Him should not perish, but have eternal life” (John 3:16). We must believe in the saving power of Jesus’ death for us. Faith, yes; but faith alone? Does simply believing that Jesus is my Savior thereby make Him my Savior? Does all faith save?

The “Faith Only” Doctrine

The most popular teaching on salvation among Bible believers today is that we are saved by faith alone. It is common to read a tract or view a preacher on TV stating that a person cannot be saved by religion, a good life, baptism, or love for one’s neighbor. Rather, we are told it is simply a matter of believing, accepting Jesus’ sacrifice for our sins, and inviting Jesus into our hearts.

Today’s faith-only concept owes much of its impetus to Martin Luther. Luther clearly saw in the Word of God that we cannot save ourselves. He saw that salvation is by grace and can be obtained through faith in the redemptive work of Jesus on the cross. However, Luther concluded that we are not only saved by faith, but by faith alone. He dared to alter the Word of God. Rom. 3:28 says, “A man is justified by faith apart from the works of the law.” Luther changed it to read, “justified by faith alone.” Luther belittled the book of James as an “epistle of straw” because it declares: “You see then how that by works a man is justified, and not by faith only” (James 2:24). He could not agree with the only biblical text speaking of salvation that uses the phrase “faith only”!

Even if James is an “epistle of straw” and is removed from the Bible, the Bible still teaches that we must do something to be saved. Jesus declared, “Not everyone who says to me, ‘Lord, Lord,’ will enter into the Kingdom of Heaven; but he who does the will of my Father who is in heaven” (Matt. 7:21). Are Jesus’ words also straw? God forbid! Did Jesus teach faith? Absolutely! Did He teach faith only? Absolutely not!

Grace: Our need of the grace of God is abundantly clear in Scripture. Our need to have faith is also quite clear. However, when “only” is added to both statements, confusion results. It is often said that “we are saved by grace alone by faith alone.” This is a self-contradiction. You would have to break the rules of logic to say we are saved by both and then add “alone” to each one.

Faith: It is one thing to say we are saved by faith. It is a very different thing to say we are saved only by faith. Paul informs us, “If I have all faith, so as to remove mountains, but don’t have love, I am nothing” (1 Cor. 13:2). Faith minus love equals nothing. The apostle John wrote: “Everyone who loves is born of God, and knows God. He who doesn’t love doesn’t know God” (1 John 4:7-8). Faith without love is empty; it will save no one.

When Paul spoke of faith in the epistle to the Romans, did he mean we can disobey God as long as we believe in His Son? In Rom. 6:17, Paul speaks of the transformation that had taken place in the lives of the brethren in Rome: “But thanks be to God, that, whereas you were bondservants of sin, you became obedient from the heart to that form of teaching whereunto you were delivered.” Romans is a great book about salvation by faith; it never was a book about salvation by faith alone.

Nobody Accepts “Faith Only”

The above discussion, by itself, misses the real issue. The reality is that nobody believes that salvation is by faith alone, even though the idea may be mouthed, defended, preached, and sincerely believed. The term “faith only” is a misnomer. Even those who teach the doctrine will often speak of “saving faith.”

Whichever way a person desires to express it, there is general agreement among all Bible believers that we need more than simplistic faith, more than acknowledgment that Jesus died for our sins. Faith that produces no change of life is insufficient; faith that is never expressed is lacking something.

Repentance: Even though it is often not expressed, many of those who hold the faith-only doctrine agree that there can be no salvation without repentance. They agree with this even though repentance is not mentioned in most of the Scriptures that teach salvation by faith. It is said that repentance is a part of saving faith. It is assumed we must repent because Jesus commands it in Scriptures such as Luke 13:3: “Unless you repent, you will all perish in the same way.” This assumption is quite right. We absolutely must look at other verses besides the ones that speak of faith. However, once repentance is accepted as a requirement for forgiveness, salvation is no longer by faith only.

The Salvation Prayer: Why do sermons end with an invitation to “pray this prayer with me”? Why do so many tracts end with the sinner’s prayer? If salvation is by faith only, why the prayer? Could it be that even though preachers mouth the faith-only words, yet in their innermost being they realize that we all need to act on our faith? Could it be that deep inside, their common sense, or even “Scriptural sense,” tells them that there must be some kind of visible response, that salvation cannot be a totally private affair, and that people must do something?

Jesus agrees that sinners need to do something. However, Jesus did not say, “He who believes and says the sinner’s prayer will be saved.” Never! Jesus said, “He who believes and is baptized will be saved” (Mark 16:16). Men have substituted the sinner’s prayer for sinner’s baptism! And in doing so, they have admitted that they do not believe in “faith only.”

But, why baptism? – To be continued.

Tags:Jesus' Church
previousInsight #272 – Name of the Church
nextInsight #274 – Why Baptism?