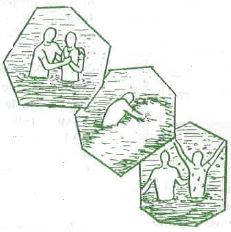 Jesus said, “He who believes and is baptized will be saved” (Mark 16:16). Jesus never said, “He who believes and prays the sinner’s prayer will be saved.” In Acts 2, following Jesus’ ascension, Peter said, “Repent, and be baptized, every one of you, in the name of Jesus Christ for the forgiveness of sins, and you will receive the gift of the Holy Spirit” (Acts 2:38). Peter never said, “Repent and invite Jesus to come into your heart for the remission of sins.” Men have substituted the sinner’s prayer for sinner’s baptism! What is the significance of baptism?

The symbolism of baptism is most impressive. According to Romans 6, the physical act of immersion in water portrays a death, burial, and resurrection. It pictures the death, burial, and resurrection of Christ at the same time that it pictures a person who has died to sin, is burying the “old man” of sin, and rises from the water to walk in a new life.

As quoted in the first paragraph above, belief, repentance, and baptism are “for the forgiveness of sins,” in order to “be saved.” If one is baptized simply to become a church member, the action is not based on faith in God’s working through baptism; therefore, it is meaningless. Since an infant is incapable of faith, its baptism is likewise meaningless. Many people get baptized simply to obey Jesus’ command. Such an action empties baptism of its true meaning; the person has no faith in the working of God to forgive sins at the moment of baptism.

Far from being a meritorious work, baptism is an act of deep faith. That must be why so many stumble over it. Just as many worldly persons have a hard time accepting a blood sacrifice as the means of forgiving sin; many religious persons have a hard time accepting water as having any relationship to salvation. The former want to be saved without blood; the latter, without water. Nevertheless, Scripture teaches that in baptism we are buried with Jesus; we are “baptized into His death,” thus contacting His blood. The Apostle John wrote by inspiration: “For there are three who testify: the Spirit, the water, and the blood; and the three agree as one” (1 John 5:7-8). God united blood and water.

Really Calling on the Name of the Lord

If there is any doubt, Paul’s conversion should clear it up. When Paul encountered Jesus on the road to Damascus, he “said, ‘What shall I do, Lord?’ The Lord said to me, ‘Arise, and go into Damascus. There you will be told about all things which are appointed for you to do'” (Acts 22:10). Jesus neither saved Paul in that moment, nor did He tell him how to be saved.

These two cases in Acts are the only examples in Scripture that explain how one calls on the name of the Lord for salvation. There is no example of just praying a prayer to invite Jesus into one’s heart. The Savior himself said, “Not everyone who says to me, ‘Lord, Lord,’ will enter into the Kingdom of Heaven; but he who does the will of my Father who is in heaven” (Matt. 7:21). Calling out vocally to the Lord Jesus is not enough. Jesus said so!

Our Way or God’s Way?

From the beginning of the Bible, we are warned against approaching God on our own terms. An outstanding example is Naaman, a Syrian with leprosy. He was willing to travel and pay to be healed. But he was not willing to humble himself. He was so set on his own idea of how he should be healed that he went into a rage over the healing offered and headed back home, unhealed.

The healing offered to Naaman was simple: “Go and wash in the Jordan seven times, and your flesh shall come again to you, and you shall be clean” (2 Kings 5:10). This did not fit Naaman’s concept of how it would happen: “Behold, I thought, ‘He [Elisha] will surely come out to me, and stand, and call on the name of Jehovah his God, and wave his hand over the place, and heal the leper'” (5:11). Fortunately for Naaman, he had servants who reasoned with him. To his credit, Naaman listened, humbled himself, and dipped in the Jordan seven times. He was healed!

There is an amazing parallel between Naaman’s case and the situation in modern times regarding salvation. Many people today have their own ideas of how they can be saved. When they are told they need to dip in water to have their sins forgiven, they get upset thinking that water can have nothing to do with salvation. When a preacher invites them to pray for salvation, they like the idea and feel very confident that God has taken away their sins.

A grave problem is that forgiveness of sins cannot be physically seen like cleansing from leprosy. People can easily be deceived into feeling that their sins are forgiven. However, feelings do not prove reality. Feelings are a reaction to our perception of reality. The patriarch Jacob went into real grief when he believed false evidence that Joseph had been slain (Gen. 37:28-35). No one would suggest that Jacob’s grief was proof of Joseph’s death. Likewise, a feeling of forgiveness is no proof of forgiveness. It is God who dictates when we are saved. Just as Naaman humbly listened to his servants, we need to listen when a servant of God reads the Word of God to us. We need to humble ourselves and come to Jesus on His terms, not on our own terms.

Today’s popular sinner’s prayer is a reenactment of the way Naaman thought he ought to be healed. Repentance and baptism are a reenactment of the way Naaman actually was healed. The “salvation prayer” is man’s substitute for believer’s baptism. Jesus never said, “He who believes and prays will be saved.” However, He did say, “He who believes and is baptized will be saved.” We each must decide if we will put our faith in the modern preacher or in the eternal Son of God.