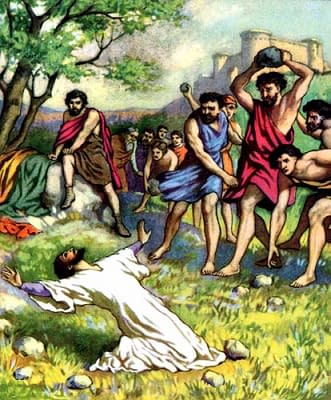 There He is, hanging on the cross with nails through His hands and feet. The Creator of the universe is executed as a criminal. Then it happens. Jesus cries out, “Father, forgive them…”

Then there is Stephen, a man full of the Holy Spirit. The stones are tearing his flesh and breaking his bones. As he is dying, he cries out, “Lord, don’t hold this sin against them!” (Acts 7:60).

Jesus taught us to pray: “Forgive us our debts, as we also forgive our debtors… if you don’t forgive men their trespasses, neither will your Father forgive your trespasses” (Matt. 6:12-15). In Mark 11:25-26, He said: “Whenever you stand praying, forgive, if you have anything against anyone; so that your Father, who is in heaven, may also forgive you your transgressions.”

When Were Jesus’ Murderers Forgiven?

Did you ever notice that Jesus and Stephen did not say, “I forgive you”? No, they did not. They both called upon God. Peter said of Jesus: “When He was cursed, didn’t curse back. When He suffered, didn’t threaten, but committed Himself to Him who judges righteously” (1 Peter 2:23). Jesus did not tell them, “I forgive you.” Rather He committed the case to God.

Seven weeks later, Peter confronted the crowd: “Jesus of Nazareth… you have taken by the hand of lawless men, crucified and killed.” When the crowd heard this along with all the rest of Peter’s message, “they were cut to the heart, and said to Peter and the rest of the apostles, ‘Brothers, what shall we do?'” And Peter replied, “Praise God, you don’t have to do anything. Jesus already forgave you while He was hanging on the cross.” No way! Rather, Peter proclaimed, “Repent, and be baptized, every one of you, in the name of Jesus Christ for the forgiveness of sins, and you will receive the gift of the Holy Spirit” (Acts 2:22-38).

Jesus prayed for God to forgive His slanderers and murderers. God answered that prayer – seven weeks later – for those who repented and were baptized. This is in perfect harmony with what Jesus told the Apostles about His plan for the world: “repentance and remission of sins should be preached in His name to all the nations” (Luke 24:47). The gospel is not about unconditional forgiveness! Rather, it’s about repentance and forgiveness!

The entire Bible shows people who are forgiven and people who are not. Notice 2 Peter 3:9. God is “not wishing that any should perish, but that all should come to repentance.” This tells us that those who do not repent will perish. It implies that God is willing to forgive everyone, but it is conditional. Speaking to Christians who sin, John writes in 1 John 1:9 “If we confess our sins, He is faithful and righteous to forgive us the sins.” In Luke 13:1-5, Jesus twice says, “unless you repent, you will all perish in the same way.”

When Are We to Forgive?

Some will admit that Almighty God puts conditions on forgiveness, but they say that we, as mere humans, cannot. So, what does Scripture teach about humans forgiving humans?

What if it is impossible to contact the person who sinned against you, either because of death or otherwise? Well, of course, you can’t do what you can’t do. Does that give anyone an excuse for not doing what they can do? Let’s discuss what a person can do.

What if he does not repent? The last half of Matt. 18 is very strong on our obligation to forgive, but keep that in the context of verses 15-17: “If your brother sins against you, go, show him his fault between you and him alone. If he listens to you, you have gained back your brother. But if he doesn’t listen, forgive him anyway.” Stop! If you know your Bible, you know those three last words are false. You know that the issue next goes to two or three witnesses, and if that doesn’t work, you tell the matter to the church, and if that doesn’t work, he is disfellowshipped.

A case in point is found in 1 Cor. 5. A Christian was actually having sex with his father’s wife. Nothing about forgiveness. It’s all about breaking fellowship with sinners within the church. “I wrote to you not to associate with anyone who is called a brother who is a sexual sinner, or covetous, [etc.] … Don’t even eat with such a person.” But jump to 2 Cor. 2:1-11: “Sufficient to such a one is this punishment which was inflicted by the many; so that on the contrary you should rather forgive him and comfort him.” The implication is that the disfellowship accomplished its purpose: the brother repented. Now – not before – Paul says, “forgive him.”

Only one verse comes to my attention that might sound like unconditional forgiveness. That’s Mark 11:25: “Whenever you stand praying, forgive, if you have anything against anyone.” How can we harmonize this verse with verses already discussed?

It might be that the issue involved is just a small offense that was not an intentional hurt. In such a case, yes, it might be good just to privately in prayer forgive and forget it, rather than go to the person and make a mountain out of a molehill.

Is that what Mark 11:25 is talking about? Or is it talking about my forgiving a person who has already repented? Or is it dealing with having a spirit of forgiveness? Whatever the verse is saying, we certainly should not use it to escape our responsibility of going to our brother/sister to seek reconciliation via repentance, confession, and forgiveness.

We have already seen that Jesus did not forgive His unrepentant mockers and murderers when He prayed to God. He asked God to forgive them, knowing that God would not forgive them without repentance. Jesus’ example in prayer teaches us that Mark 11:25 cannot be used to ignore unrepentant sin. What Jesus’ example does show us is a willingness to forgive, a merciful heart without a grudge.

Matt. 5:23-24 says: “If therefore you are offering your gift at the altar, and there remember that your brother has anything against you, leave your gift there before the altar, and go your way. First be reconciled to your brother, and then come and offer your gift.” Your brother might have something against you because you sinned against him, or because he repented of his sin and you did not forgive him. In either case, don’t offer a gift to God until you are reconciled with your brother. If we add this to Mark 11:25, it tells us to get our heart right in prayer and then go to seek reconciliation with our brother or sister. Only then, return to worship God.

Forgiveness is not a private affair. It involves two parties, either God and you or you and another person. Sweeping sin under the carpet with unconditional forgiveness is not God’s plan. Actually, it is selfish, avoiding the sometimes difficult task to “show him his fault between you and him alone.” “If he listens to you, you have gained back your brother.” “And be kind to one another, tenderhearted, forgiving each other, just as God also in Christ forgave you” (Eph. 4:32).

Tags:Believers Disagree
previousInsight #275 – Foot Washing
nextInsight #277 – What Is a Pastor?