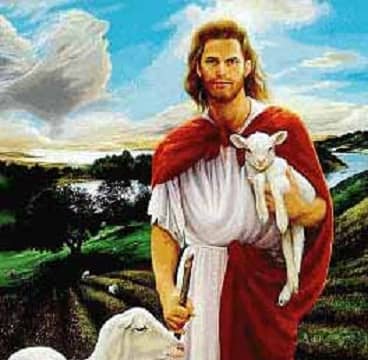 The Greek word rendered “pastor” in Eph. 4:11 is poimen (Strong’s #4166). Aside from Eph. 4:11, poimen is always translated “shepherd.” Four times, it refers to the shepherds at Jesus’ birth. All the other times, it directly or indirectly refers to Jesus. Only in the case of church leadership did translators decide to render the word as “pastor.” And where did the English word “pastor” come from? It came from the Latin pastor, which was the Latin word for shepherd. So, whether you look at the Greek or the English, a pastor is a shepherd.

By the way, Spanish does not have this confusion. Whether speaking of a physical shepherd or a spiritual shepherd, Spanish always calls both “pastor.”

Since a pastor is a shepherd, without room for argument, Jesus is the Shepherd, the Pastor. Such a concept is as ancient and as well-known as “The Lord is my Shepherd.”

So, if someone asks you, “Who is the pastor of your church?” the best reply is “Jesus.”

In regard to Jesus’ kingdom, it was nothing new to call spiritual leaders “pastors/shepherds.” The same concept is found in the OT, as in Ezekiel 34:2: “Woe to the shepherds of Israel who feed themselves! Shouldn’t the shepherds feed the sheep?”

Since a “pastor” in the Bible is a “shepherd,” we can look beyond Eph. 4:11 to find other verses that speak of spiritual leaders with the shepherd concept in view.

In Acts 20:17, for example, Paul “sent to Ephesus, and called to himself the elders of the church.” Elders. As Paul discoursed at length with them, he said, “Take heed, therefore, to yourselves, and to all the flock, in which the Holy Spirit has made you overseers, to shepherd the church of the Lord” (20:28). “Shepherd” in the verb form. Paul also calls them “overseers” or “bishops,” depending on your version. From this text we conclude that elders, overseers/bishops, and shepherds/pastors are all terms for the same work in the local church.

The same truth is seen in 1 Peter 5:1-2: “I exhort the elders among you, as a fellow elder… Shepherd the flock of God which is among you, exercising the oversight…” Again, elders are to shepherd the flock and have the oversight (obviously what overseers do). So here we have two texts which equate pastors/shepherds with overseers/bishops and elders.

Three conclusions immediately appear. Since biblical pastors are elders, young men are excluded. In addition, since a bishop/overseer is required to be “the husband of one wife” (1 Tim. 3:2), bachelors are excluded. Not only so, but in this day and age we have to add that being “the husband of one wife” excludes women from being pastors-elders-bishops.

Recently, I heard of a church where they call their elders “pastors.” That’s quite uncommon – and quite biblical.

All the references to elders-pastors-bishops in NT churches are in the plural, such as “They had appointed elders for them in every church” (Acts 14:23), and “To all the saints in Christ Jesus who are at Philippi, with the overseers (bishops) and deacons” (Phil. 1:1). The one-pastor system is unknown in the NT.

Sometimes a church may have a plurality of elders and suddenly death’s door leaves the church with only one elder. My remarks here have nothing to do with that temporary, unhappy, and unplanned situation. The issue here is about a form of church government which envisions only one pastor to lead the church, the pastor having a board of deacons or some others under him.

Students of ancient church history know that the first major departure from the biblical pattern of church government was to call one man a bishop and the other leaders presbyters (a transliteration of the Greek for “elders”). One man at the top. Reminds us of the problem the Apostle John addressed: “I wrote to the church, but Diotrephes, who loves to be first among them, doesn’t accept what we say” (3 John 9). Or as some versions translate it: “loves to have preeminence,” “likes to take the lead,” or “likes to be the number-one leader.” Any way you express it, it sounds too much like today’s one-pastor system.

The NT presents a plurality of local church leaders who are interchangeably called pastors, elders, and bishops.