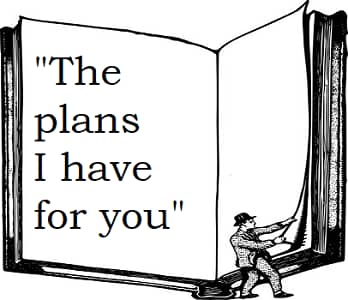 “You” four times. But who is “you”? Jeremiah prophesied before and during the Babylonian captivity. He repeatedly mentioned that his messages were about and to Judah and Jerusalem. In chapter 29, he changed audiences. Verses 1-23 are introduced thus: “Now these are the words of the letter that Jeremiah the prophet sent from Jerusalem to the residue of the elders of the captivity, and to the priests, and to the prophets, and to all the people, whom Nebuchadnezzar had carried away captive from Jerusalem to Babylon.” Verse 20 reads, “Hear therefore the word of Jehovah, all you of the captivity, whom I [Jehovah] have sent away from Jerusalem to Babylon.”

The letter is written “to all the people… carried away captive… all you of the captivity.” “You” is clearly plural. God’s “plans” here are not – repeat, not – plans for individual persons. He is talking about plans for a people, for a nation in exile. To understand the “you” here as personal is a perversion of the text. Of course, what God tells them through Jeremiah might be applicable in some way to you and to me, but we need to dig deeper into both the immediate and the long-range contexts to find out.

Other Plans for Other People

God’s “plans to prosper you and not to harm you” were not even for all the Israelites. The plans were only for those who remained in the foreign land (Babylon) and didn’t try to return home (Judah and Jerusalem). Those who remained in their homeland would indeed be harmed. “Thus says Jehovah concerning… your brothers who haven’t gone forth with you into captivity… Behold, I will send on them the sword, the famine, and the pestilence” (Jer. 29:16-17). God wanted His people in captivity. Those who resisted, resisted to their own peril.

A Long Road Ahead

And what were God’s plans for those who accepted living in a land with strange customs, strange language, and strange gods? It doesn’t seem all that prosperous – in the short term. Picture yourself as a US citizen taken captive to Russia. Prophets in the US and Russia are proclaiming that in two years you will return home. Jeremiah is preaching that the prophets are lying, that “you” won’t return home for seventy years (verse 10).

That’s why Jeremiah tells the captives: “Build houses, and dwell in them; and plant gardens, and eat the fruit of them. Take wives… and multiply there.” God’s plan for Israel was to keep them in captivity. Is that the kind of thing people are looking for when they apply Jer. 29:11 to themselves? Let’s read verses 10 and 11 together: “This is what the Lord says: ‘When seventy years are completed for Babylon, I will come to you and fulfill my good promise to bring you back to this place. For I know the plans I have for you,’ declares the Lord, ‘plans to prosper you and not to harm you, plans to give you hope and a future” (NIV). The hope and the future are seventy years away – when “you” (individually) are probably dead! These plans were mainly for their children and grandchildren – plans for a nation to return from captivity. “You” four times in Jer. 29:11 has nothing to do with God planning each detail of our personal lives.

The Really Long-Range Hope and Future

Seventy years is much longer than most of us would tolerate waiting for some future hope. But the real hope and future of Israel even extended far beyond that. Those of you who know God’s Word know that God’s plans for a future hope for Israel first came to light with Abraham. God selected the descendants of Abraham to be the means of bringing His beloved Son into the world. If you are in Jesus Christ, Jer. 29:11 has special meaning for you. Galatians 3:27-29 says, “For as many of you as were baptized into Christ have put on Christ… If you are Christ’s, then you are Abraham’s seed and heirs according to promise.” That’s the big picture of God’s plans for Israel and you. Not to mention the hope of eternal life through Jesus.

In the short term, God’s plan was for the Jews to remain in captivity, separated from home. The short-term hope and future was that after seventy years the Jews would return home – after large numbers of the “you” were dead. In the longer term, God’s plan of a “hope and a future” was to give you and me salvation through the physically Jewish Jesus Christ.

Tags:Believers Disagree
previousInsight #277 – What Is a Pastor?
nextInsight #279 – Time Budget