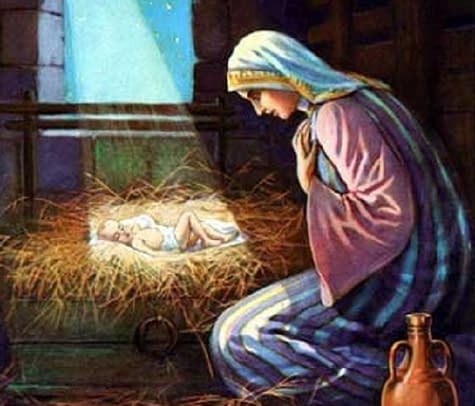 If you are a Christian woman, you are Jesus’ mother! Wait! Don’t stop reading yet. It’s not my idea. Jesus said it.

Here’s what happened: Jesus’ birth mother and half brothers approach the place where Jesus is teaching multitudes. Word gets to Jesus that they are there and want to talk with Him. Jesus responds: “‘Who is my mother? Who are my brothers?’ He stretched out his hand towards his disciples, and said, ‘Behold, my mother and my brothers! For whoever does the will of my Father who is in heaven, he is my brother, and sister, and mother'” (Matt. 12:46-50).

“Who is my mother?” In any normal situation that would be the height of insults. Can you imagine someone telling you your mother is on the phone and you reply, “Who is my mother?” A slap in the face of the one who brought you into the world!

Before we go any further, let’s be clear about Mary. She was a godly woman. She was marvelously used by God. The angel Gabriel told her, “Rejoice, you highly favored one! The Lord is with you. Blessed are you among women!… you have found favor with God.” Her relative Elizabeth, filled with the Holy Spirit, told her the same: “Blessed are you among women” (Luke 1:28, 30, 42).

Blessed among women. Absolutely! No other woman in all history has been thus blessed by God to bring His Son into the world. Of course, none of this was Mary’s doing. As Gabriel told her: “The Holy Spirit will come on you, and the power of the Most High will overshadow you. Therefore also the holy one who is born from you will be called the Son of God.” Mary simply yielded to the Holy Spirit saying, “Behold, the handmaid of the Lord; be it to me according to your word” (Luke 1:35, 38).

Still, Mary was human. She was a sinner as we all are. “All have sinned” (Rom. 3:23). Mary admitted as much when she spoke of “God my Savior” (Luke 1:47). God used a normal, godly human being to bring His Son into the world. Mary was surely blessed to be used by God this way.

Indeed, 1,000 years before that, God declared: “Blessed is the man who doesn’t walk in the counsel of the wicked, nor stand in the way of sinners, nor sit in the seat of scoffers” (Psalm 1:1).
And Paul quoted Psalm 32: “Blessed are they whose iniquities are forgiven, whose sins are covered” (Rom. 4:7).

One day, “a certain woman out of the multitude lifted up her voice, and said to him, ‘Blessed is the womb that bore you, and the breasts which nursed you!’ But he said, ‘On the contrary, blessed are those who hear the word of God, and keep it.'” (Luke 11:27-28). What a fantastic retort!

Jesus said, “On the contrary…” The unknown woman was praising the physical – Mary being Jesus’ physical mother. Jesus said, “On the contrary” and termed blessed those who listen to God’s Word, obey it, and follow it. That would include Mary, of course – not because of her physical relationship to Jesus – but because of her spiritual relationship to Jesus and to Almighty God.

Among other things, when Jesus said, “Who is my mother?” He was stating that Mary was not His mother in the normal sense. Jesus did not originate in Mary’s womb. Yes, His physical body originated there, but not His spirit. Jesus was saying that the physical is not the important thing. He was saying that those who do God’s will (which included Mary) are not only His brothers and sisters, but also His mother. Amazing! A spiritual connection with Jesus trumps a physical connection.

Jesus, as the eldest son, took care of His physical mother while hanging on the cross. He turned her care over to the apostle John (John 19:26-27). After Acts 1, there is no further information about Mary, and there is no indication she played any special role in Jesus’ church. She was a sinner saved by grace, just like the rest of us. Do not forget Jesus statement, “On the contrary…”

We accept with perhaps too little contemplation the fantastic blessing of having God as our Father, and thus being sons and daughters of God. But it goes further than that. Jesus is the eternal divine Son of God, and we have the privilege of being His brothers and sisters – and mother! What a fantastic blessing. The very fact that Jesus would call us not only followers, not only disciples, but brothers and sisters and mothers! Could there be any more loving God than our God? Could there be any more loving Savior and Lord than our Jesus?

Tags:Jesus' Connection to Others
previousInsight #290 – How Can I Understand the Bible?
nextInsight #292 – Was Jesus a Politician?