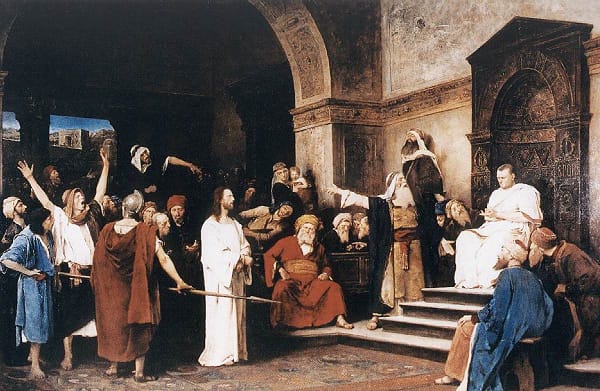 During Jesus’ lifetime, the Jews were subjugated to the Romans. With the question, “Is it lawful to pay taxes to Caesar, or not?” the Jews tried to trap Jesus in the explosive political situation. Jesus answered them: “Give therefore to Caesar the things that are Caesar’s, and to God the things that are God’s” (Matt. 22:17-21). What a profound reply! Be subject to civil authority, be subject to spiritual authority, and recognize the difference between the two.

Civil authorities deal with monetary issues one way or another. So did Jesus. He frequently spoke harshly against the wealthy. On one occasion He said: “A rich man will enter into the Kingdom of Heaven with difficulty… it is easier for a camel to go through a needle’s eye, than for a rich man to enter into the Kingdom of God” (Matt. 19:23-24). Strong language! However, Jesus never talked about reorganizing society in order to eliminate poverty. Jesus never stirred up the populace to fight the injustices perpetrated by the wealthy. Rather, he exhorted: “Don’t seek what you will eat or what you will drink… But seek God’s Kingdom, and all these things will be added to you” (Luke 12:29-31).

Jesus refused to get involved in the fight for human rights. He placed all His emphasis on human obligations. When a man pleaded with him: “Teacher, tell my brother to divide the inheritance with me,” Jesus replied, “Man, who made me a judge or an arbitrator over you?” Then He told the people, “Beware! Keep yourselves from covetousness, for a man’s life doesn’t consist of the abundance of the things which he possesses” (Luke 12:13-15). That man was looking for social justice. Jesus warned him of materialistic attitudes in his heart.

Some people consider Jesus as the first communist because He taught communion. Yes, He taught communion, but in the sense of loving our neighbor and voluntarily helping the needy. This has nothing to do for or against various economic theories such as communism, socialism or capitalism. Jesus was not an advocate of any economic system. He was an advocate of loving our neighbor.

Jesus never participated in class struggles. Zacchaeus, a rich tax collector (publican), upon hearing Christ’s message declared: “‘Behold, Lord, half of my goods I give to the poor. If I have wrongfully exacted anything of anyone, I restore four times as much.’ Jesus said to him, ‘Today, salvation has come to this house'” (Luke 19:8-9). Jesus never fought to change civil laws. Rather, He fought to change hearts. He taught a lot about the duty to help the poor, not by force, nor by a change of the political-economic-systems, but rather through good will, as in this case.

When Jesus Was Offered Political Power

One day the Jews tried to force Jesus to be their king. The multitudes had never heard a teacher like Jesus. In addition, He was healing all kinds of sicknesses. Then one day, with only five loaves and two fish available, Jesus made enough food to feed well over 5,000 people. That was it! The masses figured that Jesus must be the one whom their prophets had long ago predicted. He possessed all the signs of being a prophet. But the predictions were more than that. They predicted a king, a descendant of David. And the Jews were tired of the Romans ruling over them. It was time to crown Jesus as king of the Jews.

Far from seizing the opportunity, Jesus “withdrew again to the mountain by himself.” What? His opportunity – and he ran away. If Jesus had in mind being a physical king, there was no better time. But Jesus resoundingly refused to accept this political position.

When the crowds found Him the next day, Jesus preached a scorching sermon, contrasting the physical with the spiritual. That day, Jesus challenged all materialists both then and now, be they communists, socialists, capitalists, rich, or poor:

“Most certainly I tell you, you seek me… because you ate of the loaves, and were filled. Don’t work for the food which perishes, but for the food which remains to eternal life… I am the bread of life. He who comes to me will not be hungry… I am the living bread which came down out of heaven… It is the spirit who gives life. The flesh profits nothing. The words that I speak to you are spirit, and are life.” Following this sermon, with His refusal to accept political power, “many of his disciples went back, and walked no more with him.” (See John 6 for the entire account.)

The disillusioned materialistic disciples turned their backs on Jesus. “Son of David” was an inspiring concept for the Jews of that time. But they had the idea of an earthly king like David. They were expecting political solutions, even military action.

Later, when Jesus stood on trial, the Roman governor, Pontius Pilate asked Him, “Are you the King of the Jews?” Jesus offered a powerful definitive reply: “My Kingdom is not of this world.” He further clarified the relationship between His kingdom and the current political situation: “If my Kingdom were of this world, then my servants would fight, that I wouldn’t be delivered to the Jews. But now my Kingdom is not from here” (John 18:33, 36).

Jesus’ kingdom does not have physical soldiers; it is neither defended nor extended by military force. Jesus’ kingdom is a spiritual kingdom. Jesus did not come to the world to throw the Romans out of Palestine. Rather, He came to change people spiritually. “The Son of Man came to seek and to save that which was lost” (Luke 19:10). He came to prepare us for eternity.

When Pilate said, “I find no basis for a charge against him” (John 18:38), Pilate was clearly confessing his own understanding of the spiritual nature of Jesus’ kingdom. When Pilate understood that Jesus was not getting into the political issues of the day, that He was not threatening to undermine Rome, Pilate declared Jesus to be innocent. Pilate ended up caving in to the mob’s desire to have Jesus crucified. It was Pilate who was playing politics, not Jesus.

The New Testament is Unlike the Old

Even though Jesus was the “Son of David,” He did not come to war like David. He did not come to evict the Romans from Jerusalem. His kingdom has nothing to do with temporal power, politics, or military force. Jesus’ kingship and kingdom are fundamentally different from that of the Old Testament. David’s kingdom was very much of this world. Yes, it was a theocracy. Nevertheless, it was a political, earthly kingdom just like Egypt, Syria, and all the rest. David was very much a man of physical warfare. He fought so as not to be delivered to the Philistines (remember Goliath?), the Amalekites, the Jebusites, and all the others. David conquered Jerusalem and greatly extended the earthly domains of Israel.

Jesus, in dramatic contrast, refused to take up arms either to save his life from the Jews or to rescue Jerusalem from the Romans. “My kingdom is not of this world. If my Kingdom were of this world, then my servants would fight.” King Jesus neither defends nor expands His kingdom by military force.

Tags:Jesus' Connection to Others
previousInsight #291 – Who Is Jesus’ Mother?
nextInsight #293 – Pain and Suffering