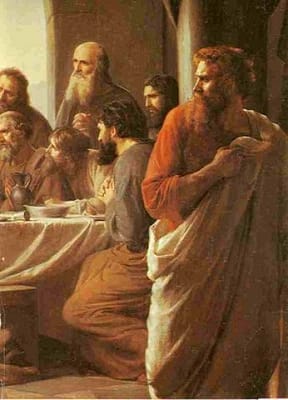 They say everyone has their price. Really? Do you? Do I? I hope not. What would it take for us to stop following Jesus? Or perhaps you are not now following Jesus. What is keeping you from it? In either case, there are many excuses. Let’s consider a few.

Too many hypocrites in the church
Churches are made up of imperfect people. Even Jesus had a hypocrite in his inner circle! Judas was more than a betrayer. When a woman anointed Jesus with a costly ointment, Judas complained that it should have been sold and the money given to the poor. Sounds great. Except that “he said this, not because he cared for the poor, but because he was a thief, and having the money box, used to steal what was put into it” (John 12:6).

Hypocrites in the church? Of course! Whenever there is a good thing out there, some people will try to take advantage of it without paying the price. Ignore them. Better yet, pray for them.

The church doesn’t offer you the help you are looking for
Yes, Jesus’ church should be aiding those with physical needs. But sometimes we mistake spiritual needs for physical. For example, a person may be seeking continual handouts when what they really need is money-management counseling. A similar situation took place in Jesus’ ministry. A man came to Him looking for help regarding a conflict with his brother – and what he got instead was a sermon: “One of the multitude said to him, ‘Teacher, tell my brother to divide the inheritance with me.’ But he said to him, ‘Man, who made me a judge or an arbitrator over you?’ He said to them, ‘Beware! Keep yourselves from covetousness…” (Luke 12:13-15). When the man was concerned about money, Jesus addressed the condition of his heart.

Considering the total dedication of Paul, it’s heartbreaking to hear him lament to Timothy: “At my first defense, no one came to help me, but all left me.” Did that prompt Paul to say, “It’s not worth it” and give up following Jesus? Not at all. “May it not be held against them. But the Lord stood by me, and strengthened me” (2 Tim. 4:16-17). May we strive to have the same spirit – both toward brothers and sisters and toward Jesus. Yes, we sometimes have need of others to help us physically. Nevertheless, just as Paul did, we need to develop the mentality of Jesus who “came not to be served, but to serve” (Mark 10:45). We might be surprised that in the process of helping others we end up helping ourselves.

You get corrected for error
Oh, how we like to correct others. Oh, how we dislike being corrected ourselves. An eloquent preacher proclaimed a lot of good truth, but he had one doctrine wrong. A brother and sister took him aside and pointed out the truth of the matter. Although it does not specifically say so, the implication in the few verses we have seems to be that Apollos accepted the correction and continued on for Jesus (Acts 18:24-28). A great example for us. Rather than be hurt or offended when others correct us, we should be thankful that someone cares enough to help us with our incorrect thinking – without judging the attitude of that person.

Your spouse rejects Christ
That’s a tough one. We naturally are strongly influenced by those near and dear to us. There is – or should be – no one dearer to us than our spouse. No one? Well, in this world. “Love your neighbor as yourself” is the second commandment, not the first. The first is to love God.

Though most of us would never want to be in the position of having to choose between our spouse and God, it is nothing new. It’s as old as Eden. Adam chose to stick with Eve rather than God. Millennia later Jesus declared, “A man’s foes will be those of his own household. He who loves father or mother more than me is not worthy of me; and he who loves son or daughter more than me isn’t worthy of me” (Matt. 10:36-37). Jesus calls us to make some hard choices. It’s a choice between the life we have now and life for all eternity.

People mock you for following Jesus
“Blessed are you when men shall hate you, and when they shall exclude and mock you, and throw out your name as evil, for the Son of Man’s sake. Rejoice in that day, and leap for joy, for behold, your reward is great in heaven, for their fathers did the same thing to the prophets” (Lk. 6:22-23). Unbelievers mocking believers is nothing new. Some of the Athenian philosophers mocked Paul when he spoke of a future resurrection. Even Jesus was mocked on the cross. Being mocked for Jesus puts us in good company.

Do you know anything or anybody better than Jesus?
May God help us all not to make excuses, not to have a price, not to allow circumstances to draw us away from Jesus. Let’s follow Jesus – no matter what! After He fed the 5,000, many followed Jesus with materialistic motives. He preached a hard, spiritual sermon causing many to turn their backs on Him. As the many were leaving, “Jesus said therefore to the twelve, ‘You don’t also want to go away, do you?’ Simon Peter answered him, ‘Lord, to whom would we go? You have the words of eternal life'” (John 6:67-68). Amen!