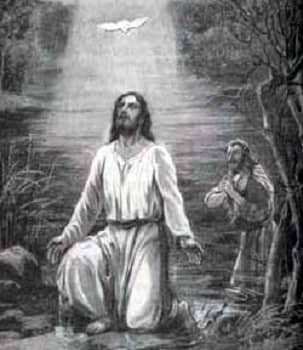 While it is true that “Christ” became Jesus’ name, that was not His name from the beginning. The angel told Joseph, “You shall call his name Jesus” (Matt. 1:21). During His ministry – and on the cross – He was identified as “Jesus of Nazareth.” “Christ” is different. It was first a title before it became part of Jesus’ name.

Jesus Is the Christ

There never was any question about Mary’s son being named “Jesus.” Being “Christ” is a different matter.

In the middle of Jesus’ ministry, He posed the question of His identity to His apostles: “‘Who do you say that I am?’ Simon Peter answered, ‘You are the Christ, the Son of the living God.’ Jesus answered him, ‘Blessed are you, Simon Bar Jonah, for flesh and blood has not revealed this to you, but my Father who is in heaven'” (Matt. 16:15-17). “The Christ.” A revelation from God.

A year or so later, Peter proclaimed this same truth to thousands of Jews gathered in Jerusalem. After heaping evidence upon evidence, Peter climaxed it: “Let all the house of Israel therefore know certainly that God has made him both Lord and Christ, this Jesus whom you crucified” (Acts 2:36). God made Him Christ.

Saul of Tarsus was dead set against Jesus of Nazareth. But after his conversion, Paul “confounded the Jews who lived at Damascus, proving that this is the Christ” (Acts 9:22).

What Does “Christ” Mean?

To anoint is to apply oil or other ointment on a person. The Bible speaks of both secular and sacred anointing. Perhaps the most famous of the former is Psalm 23:5: “You anoint my head with oil.” The context is speaking of all kinds of blessings by the Shepherd. Far more significant is sacred anointing. It was a ceremony in the OT signifying God’s choosing and setting apart certain men to certain works. But how does this apply to Jesus?

When Was Jesus Anointed?

Several years after Peter declared to the Jews that Jesus was/is the Christ, Messiah, Anointed One, God sent him to the Gentile household of Cornelius. Listen to Peter: “after the baptism which John preached; even Jesus of Nazareth, how God anointed him with the Holy Spirit and with power, who went about doing good” (Acts 10:37-38).

For centuries, the Jews had been looking forward to this time. Although there were many “messiah’s” (anointed ones) throughout OT history, their prophets foretold of a particular anointed one. This is reflected in the NT.

When the wise men came to Herod looking for the newborn “King of the Jews,” Herod connected that to the Jew’s anticipation of a particular anointed one. That’s why he asked the Jewish leaders “where the Christ would be born” (Matt. 2:4). Herod knew the Jews were awaiting their Messiah, and he figured the Jewish leaders would know where He would be born. Herod was right.

Andrew told Peter, “We have found the Messiah!” Found Him? Well, yes. As it says just a few verses later (John 1:45), “Philip found Nathanael, and said to him, ‘We have found him, of whom Moses in the law, and the prophets, wrote: Jesus of Nazareth.'”

The Jews were expecting a particular anointed one, the Messiah, the Christ. But what types of persons were sacredly anointed in the OT? If we learn that, we can grasp more clearly what it means for Jesus to be the Anointed One, the Christ.

For centuries, the major Jewish concept of “the Anointed One” was of a coming king. From His birth to His death, Jesus was considered King. Herod made the connection between “Christ” and “King of the Jews.” The sign placed on His cross said, “Jesus of Nazareth, the king of the Jews.” So many of Jesus’ parables were about the “kingdom of heaven.” Jesus told Pilate, “My Kingdom is not of this world” (John 18:36). “My kingdom.” His kingdom. Jesus now rules over His spiritual kingdom. A kingdom is not a democracy. A king has sole authority. Jesus is the King.

Jesus is also the Priest who offered the sacrifice for our sins. The book of Hebrews is filled with the subject. For example: “Therefore he [Jesus] is also able to save to the uttermost those who draw near to God through him, seeing that he lives forever to make intercession for them. For such a high priest was fitting for us… who doesn’t need, like those high priests, to offer up sacrifices daily, first for his own sins, and then for the sins of the people. For he did this once for all, when he offered up himself” (Heb. 7:25-27). Jesus is at once both the sacrifice and the Priest. As Priest, He stands between us and God, interceding on our behalf. No one comes to God except through Jesus. Forgiveness from sin is solely through Him.

Jesus is also a Prophet. When He was transfigured, God from heaven said, “This is my beloved Son, in whom I am well pleased. Listen to him'” (Matt. 17:5). A prophet is a messenger of God who proves his message is from God by the miracles he works. When Jesus brought a dead man back to life, the people “glorified God, saying, ‘a great prophet has arisen among us!'” (Luke 7:16). Jesus “taught them in their synagogue, so that they were astonished, and said, ‘Where did this man get this wisdom, and these mighty works?'” (Matt. 13:54). Peter once said to Jesus, “You have the words of eternal life” (John 6:68). Jesus is Prophet par excellence.

“Christ” is more than a name; and this Insight is more than an academic exercise. Near the end of his Gospel, John says: “These are written, that you may believe that Jesus is the Christ, the Son of God, and that believing you may have life in his name” (John 20:31). Do you believe Jesus is the Christ? Do you believe that He has been anointed by God to be your Prophet, Priest, and King?