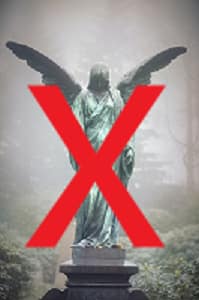 Would you know an angel if you saw one? Believe it or not, “some have entertained angels without knowing it” (Heb. 13:2). What does the Bible tell us about these heavenly creatures?

Even though angels sometimes appear as men/males, they are asexual. “When they [humans] will rise from the dead, they neither marry, nor are given in marriage, but are like angels in heaven” (Mark 12:25).

Angels are somewhere between God and us. An angel stopped John from worshipping him, saying, “See you don’t do it! I am a fellow bondservant with you… Worship God” (Rev. 22:9). Hebrews 2:6-7 says, “What is man… or the son of man?… You made him a little lower than the angels.” Jesus, who was above angels, was made human, lower than angels. God/Jesus – angels – humans. As for different levels/ranks among angels, all we know is that Michael is an archangel who has angels under him (Jude 1:9; Rev. 12:7). All other ideas are human inventions.

Angels follow events on earth (1 Cor. 4:9) and rejoice when sinners are saved (Luke 15:10), but they are limited in knowledge. “The prophets… predicted the sufferings of Christ… which now have been announced… which things angels desire to look into” (1 Pet. 1:10-12). Regarding the Second Coming: “No one knows of that day and hour, not even the angels of heaven” (Matt. 24:36).

What Does “Angel” Mean?

The letters to the seven churches in Revelation 2 and 3 present an interesting and debated case: “To the angel/messenger of the church in… write.” Rev. 22:16 says: “I, Jesus, have sent my angel to testify these things to you for the churches.” From an angel to John. What sense does it make for John to write to a heavenly angel? But it does make sense for him to write to human messengers who would deliver the messages to the churches.

What Do Angels Do?

From the meaning of the word, we already know a major work of angels: carrying messages from God to humans. The Bible is the work of the Holy Spirit. Agreed. But angels were involved in the process: “the word spoken through angels proved steadfast… the law as it was ordained by angels… ordained through angels by the hand of a mediator” (Heb. 2:2; Acts 7:53; Gal. 3:19).

The only work recorded of the angel Gabriel was bringing messages to Daniel, Zacharias, and Mary. As he said to Zacharias: “I am Gabriel, who stands in the presence of God. I was sent to speak to you” (Luke 1:19). Zechariah (OT) numerous times talked with an angel. An angel told two Marys that Jesus had risen and told them what to do (Matt. 28:1-7). Cornelius received divine instructions from an angel (Acts 10:22).

As for other work, God promised an angel would protect the Israelites through the wilderness (Ex. 23:20-23). An angel defeated the Assyrian army, protecting Jerusalem (2 Ch. 32:21). Angels ministered to Jesus both at the beginning and end of His ministry (Matt. 4:11; Luke 22:43). An angel rolled away the stone covering Jesus’ tomb (Matt. 28:2). An angel delivered Peter from prison (Acts 12:6-10). An angel struck Herod to death because of his sin (Acts 12:21-23). In short, angels are God’s ministers who perform multitudes of tasks for Him: protecting, delivering, punishing, and whatever other task God may have for them.

Michael the archangel was somehow involved in a battle with earthly kingdoms (Dan. 10) and even in a great battle with Satan (Rev. 12) – things difficult for us to grasp.

A word of caution. Satan actually quoted Scripture about angels to tempt Jesus: “He will command his angels concerning you, and, on their hands they will bear you up, so that you don’t dash your foot against a stone (Matt. 4:6). Jesus did not “step out on faith” (jump off the top of the temple) to prove Himself to Satan. We should never call it “faith” when we purposely behave irresponsibly, expecting angels to intervene.

With all the above in mind, what should we today expect from angels? Hebrews 1:14 says of them: “Aren’t they all serving spirits, sent out to do service for the sake of those who will inherit salvation?” Jesus said, “See that you don’t despise one of these little ones, for I tell you that in heaven their angels always see the face of my Father” (Matt. 18:10). So, there is a connection between God’s heavenly angels and God’s earthly children. In the texts just quoted, Hebrews told us that angels serve Christians, and Jesus warned us not to despise “little ones” who have angels in God’s presence. Praise God for all this. But…

… Don’t get carried away with the multitude of false ideas and attitudes regarding angels today. Both of the texts just quoted speak of angels in the plural. Neither text says that each of us has our own personal guardian angel. Jesus’ statement says absolutely nothing about what those angels might do on behalf of the “little ones.” The Hebrews statement is about angels doing service for the sake of Christians. However, there is no detail about what kind of service they do or how personal it may be, whether physical or spiritual.

Thank God for whatever His angels do for us! But – let’s not lose perspective: praying to angels, making lucky-charm angel images, trying to connect to a supposed personal guardian angel, etc. Scripture texts about angels helping us personally are very rare. The Bible says far more about what the Father, the Son, and the Holy Spirit do for us. To the extent God uses angels to do His bidding, wonderful. But let’s never forget that heavenly angels are God’s servants just as our earthly brothers and sisters are God’s servants. It is Jesus we serve, not humans nor angels.