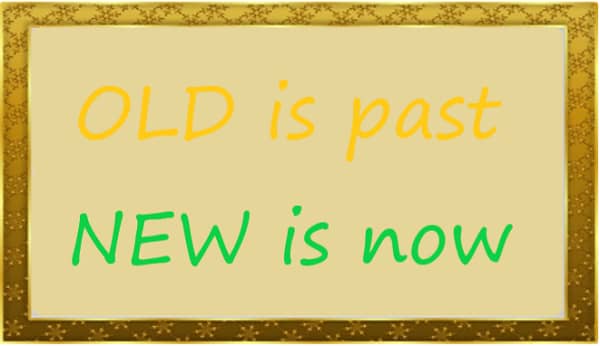 The Old Testament is God’s Word and is definitely valuable in many ways. (See some of the ways in Insight #337.) However, we now have a new covenant, testament, law. Many errors in “Christian” circles stem from the failure to keep in mind various differences between the Old and New Testaments.

We Have a New Testament/Covenant

To understand much of prophecy and God’s dealings with mankind in general, it is essential to recognize that from the OT to the NT there are dramatic changes to God’s people, God’s nation, and God’s kingdom.

Jews: Before the gospel, yes,the Jews were God’s chosen people. But since Calvary, “there is no distinction between Jew and Greek… for you are all children of God, through faith in Christ Jesus… There is neither Jew nor Greek… for you are all one in Christ Jesus” (Rom. 10:12; Gal. 3:26-28). Since the first century, Christians are God’s chosen people.

Nation: Today’s nation of Israel is not God’s nation. The USA is not – and never was – God’s nation. No earthly nation is God’s nation today. The apostle Peter told Christians, “You are a chosen race, a royal priesthood, a holy nation” (1 Peter 2:9). Since the first century, Jesus’ people are the one and only nation of God.

Kingdom: The OT predicted a glorious kingdom. Jesus began His ministry preaching: “The time is fulfilled, and God’s Kingdom is at hand! Repent, and believe in the gospel” (Mark 1:15). God’s Kingdom is about the Gospel, not about some future physical reign. To Pilate Jesus said: “My Kingdom is not of this world. If my Kingdom were of this world, then my servants would fight, that I wouldn’t be delivered to the Jews” (John 18:36). To His disciples He said, “There are some standing here who will in no way taste death until they see God’s Kingdom come with power” (Mark 9:1). And come it did – by the power of the Holy Spirit on Pentecost. Since the first century, Jesus’ church is God’s kingdom.

Some people and churches realize that in general we are not under the Old Covenant, yet they teach that we should obey certain specific old laws even though they are not commanded in the New. A few of the most common are:

Sabbath: Colossians 2:13-17 says that Jesus “made you alive… wiping out the handwriting in ordinances which was against us. He has taken it out of the way, nailing it to the cross… Let no one therefore judge you… with respect to… a Sabbath day.” Nailed to the cross. Gone.

Tithe: Tithing is not commanded in the NT but giving generously is. Christians are exhorted to give “as he may prosper… according to what you have” (1 Cor. 16:2; 2 Cor. 8:12). I believe that for most of us in the wealthy USA, that would mean much more than a tithe – for both the church and the needy. In any case, the NT says, “Let each man give according as he has determined in his heart, not grudgingly or under compulsion, for God loves a cheerful giver” (2 Cor. 9:7).

In Short: The OT contains much needed spiritual food. It contains the history of the universe. It shows God’s interaction with His chosen people throughout history. It provides the context for the NT. But with respect to laws and commandments, the Old is old. We have a new covenant, testament, law. Therefore, “Give diligence to present yourself approved by God… properly handling the Word of Truth” (2 Tim. 2:15).

Tags:Old vs. New Testament
previousInsight #337 – Why Bother with the OT?