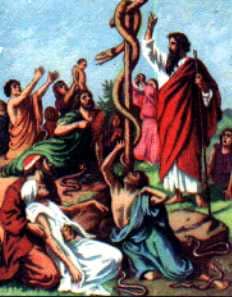 After Jesus died and rose, the New Testament came into force. So, why bother with the Old Testament? Besides, the OT has some rather difficult and boring chapters. Well, let’s look at the positive side.

We often learn better from examples than from edicts. The OT is loaded with examples of daily living. Who is not inspired by Joseph and Daniel or warned by the falls of David and Solomon. The NT itself makes this point. After naming many OT examples, Paul said, “These things happened to them by way of example, and they were written for our admonition” (1 Cor. 10:11). Written for us. The NT mentions only a few of the many helpful examples found in the OT – examples we will find when we open it and read it.

NT Symbols Based on the OT

Jesus is the Lamb of God? Maybe you understand that. But what about “a new and living way, through the veil, that is to say, his flesh” (Heb. 10:20)? These NT symbols cannot be understood without a knowledge of the OT. You can appreciate John 3:16 much more if you know what verse 14 is talking about when it says, “As Moses lifted up the serpent in the wilderness…” Another example is Christ being called our Passover in 1 Cor. 5:7. As for understanding the book of Hebrews, you will be lost without an OT background.

The OT is filled with prophecy. Of special interest are the many predictions of a coming Messiah. The Gospels repeatedly record Jesus fulfilling those prophecies. His birthplace was foretold (Micah 5:2). How much He would be sold for is foretold (Zech. 11:12-13), including where the blood money would end up.

One of the most beautiful and powerful prophecies is Isaiah 53, which led to the conversion of the Ethiopian treasurer (Acts 8:26-40). After some study, we can see that Daniel predicted the actual year of the Messiah’s arrival (9:25-27). Fulfilled OT prophecy confirms the NT.

So many of us tend to be more interested in the latest news than in dusting off the pages of our history books. But a decent knowledge of the past can give us a better understanding of the present. The OT records the origin of the universe, of the human race, of marriage, of sin, of the curse upon the earth, of God’s plan to redeem mankind. The OT records the origin of the Jews and how God worked through them to prepare for Jesus in the NT.

Not a Bother, but a Blessing Yes, today we are under the NT. But the OT prepared the way for the NT. When we read, explore, and meditate on the OT, we become better able to appreciate, understand, and apply the NT to our faith and daily lives. After all, the Old Testament is part of God’s Word.