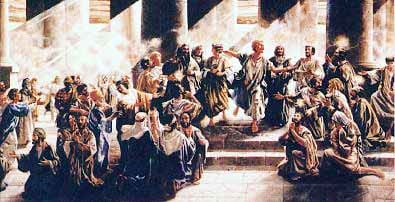 Some fifty days after denying he knew Jesus, Peter stood boldly in Jerusalem. The apostles had just been baptized in the Holy Spirit. A noise like a mighty wind had caused the Jewish Pentecost worshippers to gather in vast numbers around the apostles.

In his introductory remarks, Peter told the assembly, “It will come to pass in the last days, says God, I will pour out of my Spirit upon all flesh… ” (Acts 2:17). Thus the inspired Peter foretold the last-days-twentieth-century charismatic renewal. Or did he?

The fact is: the words quoted above are not Peter’s words at all. Rather, Peter was quoting Joel, who prophesied some 8 centuries earlier. Joel is the one who had prophesied about the last days.

Peter was opening his sermon by referring to the baptism of the Holy Spirit, about which the crowds had been debating. Peter explained: “This is that which was spoken by the prophet Joel: ‘And it will come to pass in the last days, says God… ‘ ” (Acts 2:16,17; Joel 2:28-32). “This is that which was spoken.” Without room for doubt, Peter is saying that the events of that Pentecost, 30 A.D., were a fulfillment of Joel’s prophecy about the last days.

Some students consider that “the last days” refers to the final years of the Mosaic system of sacrifice, which God wiped off the face of the earth via the Romans in 70 A.D. Others consider that “the last days” refers to the entire Gospel age, because the Gospel is God’s final revelation to man. Either way, in Acts 2, quoting Joel 2, Peter was declaring that all those present on that day of Pentecost, 30 A.D., were already in “the last days.” “This is that which was spoken.”