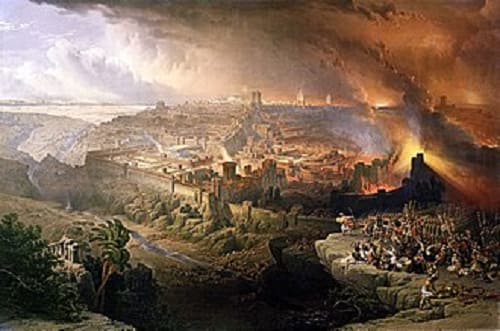 A supposed proof that we live in the “last days” is the abundance of wars, famines, and earthquakes in the world. Matthew 24 is often cited because it talks of “the end.” But, the end of what? Only a superficial reader would assume “the end” means the end of the world. Yes, the disciples asked Jesus (vs. 3) about “the end of the world [age],” but that is because they were in shock. Jesus had just said about Jerusalem’s temple, “There shall not be left here one stone upon another” (vs. 2).

In the latter part of Matthew 24, Jesus did deal with their question about the end of the world. Nevertheless, if one reads carefully, it can surely be seen that Jesus first discussed the issue HE had raised: the end of Jerusalem and its temple. Notice the flow of thoughts in this abbreviation of verses 6-16: “You shall hear of wars and rumors of wars… be not troubled… the end is not yet… famines, and pestilences, and earthquakes… the beginning of sorrows… this gospel of the kingdom shall be preached in all the world… then shall the end come… When you therefore shall see the abomination of desolation, spoken of by Daniel the prophet, stand in the holy place… then let them which be in Judea flee.”

Allow me to summarize in my own words: “Wars and earthquakes do not mean the end. After the gospel is preached in all the world (see Insight #68), the end of Jerusalem, as predicted by Daniel, will come. When you see Jerusalem surrounded by armies (see parallel text in Luke 21:20), run for your lives.”

The early verses of Matthew 24 cannot be about the end of the world because Jesus specifies Judea and tells believers when to escape. The first part of Matthew 24 is clearly a confirmation and enlargement of Daniel 9. Any student of Jewish and Bible history knows that Daniel’s and Jesus’ words were amply fulfilled before and during A.D. 70. It is all history. It is all fulfilled prophecy.