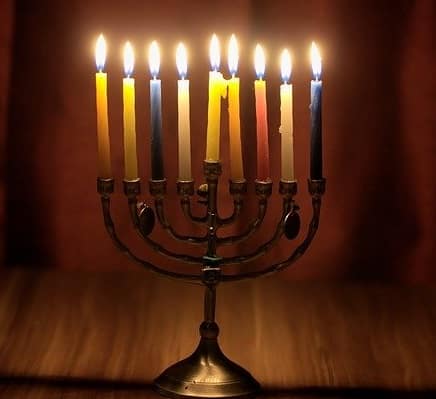 Only four times in the past hundred years has the first day of Hanukkah fallen on Christmas, as it did in 2005. The Jewish calendar, based on the moon, has months of just 29 or 30 days. Thus, seven times every nineteen years, a thirteenth month must be inserted. For this reason, Jewish festivals always move in relationship to our calendar. In the Jewish calendar, Hanukkah always begins on the 25th of Kislev.

Since it is Jewish, Hanukkah is recorded in the Bible, right? Well, sort of. You will never find the feast of Hanukkah (which means “dedication”) in the five books of Law. However, you will find it mentioned in John 10:22-23: “And it was at Jerusalem the feast of the dedication, and it was winter. And Jesus walked in the temple in Solomon’s porch.” As early as Josephus, it was also called the “Feast of Lights.”

You will also find it in Daniel. Not by name, or even as a feast. Rather, Daniel predicted the events which led to establishing the feast. Daniel predicted a very difficult and dangerous time for the people of God, all of which was fulfilled during the four hundred years between Malachi and Matthew.

The climax of the history is predicted in Daniel 8 when “the daily sacrifice was taken away… unto two thousand and three hundred days; then shall the sanctuary be cleansed” (verses 11, 14). The fulfillment is recorded in the Apocrypha, in 1 Maccabees 4:50-59: “The lamps that were on the candlestick they lighted… on the twenty-fifth day of the ninth month, which is called Kislev… and so they kept the dedication of the altar eight days… Moreover Judas and his brethren with the whole congregation of Israel ordained that the days of dedication of the altar should be kept in their season from year to year.”

That, in a nutshell, is the prophetic and historical origin of Hanukkah. But were the events important enough to add another festival to the Jewish calendar? Who took away the daily sacrifices and why? Who restored them and how? What was happening politically and religiously in Israel at this juncture in history? What difference does it make to us? To begin to explore these issues click on the next Insight below.