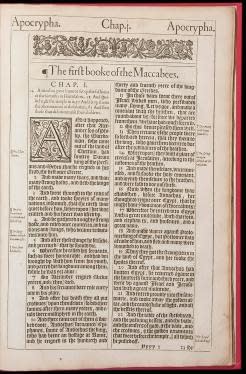 Antiochus Epiphanes went too far. He outlawed circumcision and Sabbath keeping. He demanded idolatry and eating swine. He replaced God’s Levitical High Priest with a Benjamite. In Jerusalem he built a heathen altar on top of God’s altar. He ripped and burned the Holy Scriptures he could find.

Such drastic measures were bound to stir up drastic reactions.
It did not happen in a day. It took men, women, and youth of faith and valor to stand up for the truth of God. It was a great testing time in Israel, separating those who would serve God at any cost from those who preferred “modern” ways. It took months and years for the resistance to become strong enough to prevail. It took courageous men of God like Mattathias.

When Antiochus’ officials came to the city of Modin to force heathen sacrifices, the priest Mattathias refused. At that moment, a Jew came forward to sacrifice, whereupon Mattathias rushed to slay him upon the altar. The king’s officers were next slain and the heathen altar torn down. Interestingly, the Book of Maccabees compares Mattathias’ zeal to that of Phinehas (Num. 25). Mattathias and his sons, including Judas Maccabeus, now fled to the mountains. The resistance had begun.

Elsewhere, the king’s men tried to force an aged scribe, Eleazar, to eat swine’s flesh or face death. When he refused, his “friends” tried to persuade him to save his life by providing his own clean meat and making it look like he was eating the heathen sacrifice. But the 90-year-old saint refused such hypocrisy. He did not want to give a bad example to the young believers who would think he had left the faith. He also knew he could escape the punishment of Antiochus but could not escape the hands of the Almighty. He bravely went to his death. Oh that we all would follow his brave example of faith! Refuse to disobey God, no matter what!

Then there were seven brothers and their mother who chose death rather than disobey God’s law against eating unclean meat (Lev. 11; Deut. 14). Antiochus had the tongue of the first cut out, then his extremities cut off, and his trunk thrown into a frying pan, while his mother and brothers looked on and exhorted one another to die valiantly. One by one, the brothers were tortured and murdered. When the youngest was left, Antiochus promised him wealth and position if he would turn from the laws of his fathers. Antiochus also called upon the mother to exhort her son to save his life. The mother rather exhorted her son to have no fear of this tormentor but rather to trust in the Creator. Whereupon the youth accepted his death, and last of all the mother was slain. What a mother! This was no natural mother’s love. This was a godly, spiritual mother’s love!

Such was the amazing faith of some of the Jews in the second century before Christ. It was a dreadful time in Israel, but Daniel had predicted that a little horn (read: Antiochus) would take away the daily sacrifice and cast God’s sanctuary and truth to the ground (8:9-12). For a while it looked like he might triumph. However, because of such great men, women, and youth of faith, with God as their helper, Daniel could also predict: “then shall the sanctuary be cleansed” (8:14).

NOTE ON SOURCES:
These amazing events are found in the two books of Maccabees, part of the Apocrypha. Although the Apocrypha is included in Catholic Bibles, it is excluded from other Bibles inasmuch as the Jews did not accept them as inspired (consider Rom. 3:1-2). Although not Scripture, the two books of Maccabees are of considerable value because they shed light on Jewish history between the Old and New Testaments. Among other things, they are our primary source for historical data showing the fulfillment of the little horn prophecy in Daniel 8. The specific chapters are 1 Maccabees, chapters 1-6 and 2 Maccabees, chapters 3-10. (For more on the Apocrypha, see Insight #285.)