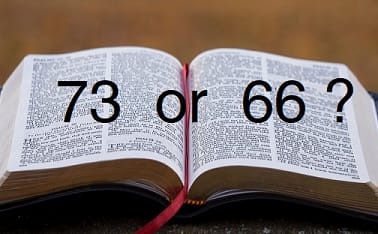 “There are 66,” you reply. Good, but have you ever opened a Catholic Bible and counted their books? You’ll find 73 of them. Orthodox Bibles have even more. What’s going on?

The extra books in Catholic Bibles are Tobit, Judith, Ecclesiasticus (Sirach), 1 and 2 Maccabees, Wisdom, Baruch and additional chapters in Esther and Daniel. Catholics call these books “Deuterocanonical.” We call them “Apocrypha.”

I think the most important thing to say is that all these additional books, whether in Catholic or Orthodox Bibles, are part of the Old Testament. All Bibles of all faiths have the same 27 books in the New Testament. That is extremely important. Why? Because the New Testament is new. The Old is old, just as it says in Hebrews 8:13: “In that he says, ‘A new covenant,’ he has made the first old.” At the Last Supper Jesus said, “This is my blood of the new covenant” (Matt. 26:28). Hebrews says that Jesus “is the mediator of a new covenant… For where a last will and testament is, there must of necessity be the death of him who made it” (Heb. 9:15-16). All the extra books were written long before Jesus died or even came to earth.

In short, since we are not under the Old Covenant/Testament but under the New, it is most important and comforting to our faith to know that all Bibles of all churches are in full agreement on the same 27 books of the New Testament.

Is Anything New Found in Those Other Books?

Even though the Deuterocanonical books have nothing to do with the NT, it is still meaningful to inquire if they offer us any new thing of value.

Rome says, “Yes.” On one issue. Purgatory is defended based on 2 Maccabees 12:39-45, in which Judas Maccabeus and his men prayed for forgiveness of sin for some who were slain. The stated reason for those prayers was their belief in the resurrection of the dead. The text does not say that God ever commanded such prayers, nor that He ever hears or answers such prayers. Besides that, Rome teaches that purgatory ceases at the resurrection. But this text says absolutely nothing about the state of the dead now before the resurrection. There is not a thread of support for purgatory here.

To me, the value of the Apocryphal books is their view into the Jewish nation between the OT and NT. Outstanding is the historical record found especially in 1 Maccabees. In the second century B.C., the Syrians (as part of the Grecian Empire) attempted to blot out the uniqueness of the Jews and their temple worship. The Syrians failed. Under the leadership of Judas Maccabeus, the Jews prevailed, and the temple was cleansed. The interesting thing is that Daniel 8 predicted these events. Thus, 1 Maccabees provides the historical record of the fulfillment of Daniel 8. For detailed information, start reading here.

Why Those Books Do Not Belong in the Bible

The word “apocrypha” means “secret” or “hidden.” This is because the origin of the books is questionable. Roman Catholics consider this term derogatory. They prefer “deuterocanonical,” which literally means “second canon.” But why second canon?

It is my belief that Romans contains the most important argument regarding which books make up our Old Testament. The Apostle Paul records: “What advantage does the Jew have?… first of all, they were entrusted with the oracles of God” (Rom. 3:1-2). This seems the clearest text to tell us that the Jews were not only God’s chosen people, but they were also the only nation entrusted with God’s Word before the coming of Christ. Therefore, the Jews are the only ones who can tell the world which were God’s inspired books before Jesus came.

I have a copy of present-day Jewish Scriptures. It contains the same 39 books that we all have in our OT – and no more. Throughout history the Jews have combined and organized these books differently than we are accustomed to. For example, in the quote that follows, you will notice that Josephus mentions 22 books, not 39. Without going into all the details, the biggest difference in grouping books is that the Jews counted the 12 short minor prophets as one book, not 12 books as we do. Though grouping and organization may differ, we end up with the same 39 books. The clearest witness to the contents of the Jewish Scripture at the time of the Apostles is found in the writings of Josephus, a first-century Jewish priest, military commander, and historian. Josephus is witness to a time limit on the OT.

In Josephus’ work Against Apion (Book 1, Sect. 8), we read these words: “For we have not an innumerable multitude of books among us… but only 22 books, which contain the records of all the past times; which are justly believed to be divine… till the reign of Artaxerxes king of Persia, who reigned after Xerxes… It is true, our history has been written since Artaxerxes very particularly, but has not been esteemed of the like authority with the former by our forefathers, because there has not been an exact succession of prophets since that time… no one has been so bold as either to add any thing to them, to take any thing from them, or to make any change in them.”

I think the most important point that Josephus makes is that there were no more divine books after Artaxerxes. The said Artaxerxes died in 425 B.C. So, Josephus is saying that divine books were written up to that time, and that other Jewish books written after that time do not have the same authority. The death of Artaxerxes roughly coincides with the writing of Malachi. In other words, Josephus is saying that the canon closed with Malachi, and the Jewish books written after that time cannot be added to the canon. This rules out the Apocrypha.

Thus from the first century to the twenty-first century, the Jews have declared to the world that the 39 books in our Old Testament are the books, and the only books, which God gave to them by inspiration. Our Bible of 66 books is complete!