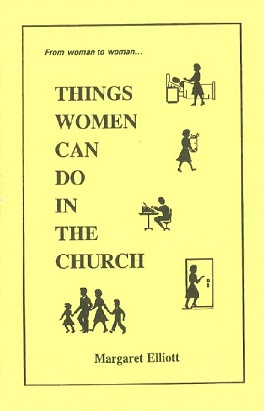 When my beloved Margaret (now with Jesus) was active in the Lord’s work, among many other things she wrote was a series of pamphlets “From woman to woman.” A popular one was “Things Women Can Do in the Church.” It was not a scriptural discussion. Rather, it contained pages of lists. Specifics. Suggestions. Ideas of all sorts compiled over the years.

Yes, the booklet was written as a response to the general idea that if women are denied leadership in the church, they are shut out of the work of the church. The complaint is expressed in multiple ways. But rather than even mention the complaint, much less discuss what Scripture says, Margaret simply made a positive contribution with positive ideas – over 150 of them.

The unspoken message of the booklet is that you don’t need a title, a position, or an office in the church in order to have more to do than you possibly can do – to be extremely useful, helpful, and important in the Lord’s church. Open and download booklet here.

Scripture says many beautiful things about women. Equal in God’s eyes: “There is neither male nor female; for you are all one in Christ Jesus” (Gal. 3:28). Valuable: “Who can find a worthy woman? For her price is far above rubies” (Prov. 31:10). Worth dying for: “Husbands, love your wives, even as Christ also loved the church, and gave himself up for it” (Eph. 5:25).

Does the Bible Mention the Office of Deaconess?

Is the word “deaconess” even found in your Bible? Probably not. It depends on the version you have. As far as I am aware, in no English Bible is “deaconess” found outside of Rom. 16:1, where Paul speaks of Phoebe. Even then, only a handful of Bibles describe her as a deaconess. More Bibles call her a deacon. But more common yet, she is simply called a servant. Why the differences? The Greek word in question is diakonos, of which “deaconess” and “deacon” are transliterations.

You can find detailed information on diakonos in Insight #271, but briefly, diakonos outside the NT usually carried the meaning of servant, waiter, messenger. In our Bibles, diakonos is usually rendered either “minister,” or “servant.” It depends on the translators’ preferences in each case. In three cases, most translators have chosen to transliterate diakonos rather than translate it. Thus, most Bibles have the English word “deacon” in Phil. 1:1 and 1 Tim. 3:8, 12. I believe most Bible students would agree that these three texts refer to “the office” of deacon.

But what about Phoebe in Rom 16? Did she have an official position or was Paul simply saying she was a servant of the church? In my mind, the only warrant for rendering Rom. 16:1 as “deacon” or “deaconess” is if there is a Scripture that indicates there is such an “office” in the Lord’s church. The only possibility I know of is 1 Tim. 3:11.

In 1 Tim 3:11 there is ambiguity again, this time of the Greek word gune. Gune (Strong’s #1135) refers either to a “woman” in general or specifically to a “wife.” Only each context can tell. Thus, English Bibles vary in the way they render this verse.
“The women are to be…” (NIV).
“Women must likewise be…” (NASB).
“Their wives likewise must be… ” (ESV).
“Their wives must be…” (NKJV).
Be aware that in English Bibles, italics are used to indicate words not in the original which translators have inserted to make smoother English. (Be cautious with Bibles that don’t use italics.)

Of the examples above, two have rendered gune as “women,” and two as “wives.” Notice that the NKJV has “their” in italics. If one thinks that gune in this verse refers to “wives,” then it makes good English to add “their.” But when we see that “their” is in italics, thus not in the original, the translation of gune becomes more problematic. We must examine the context.

“If a man desires the position of a bishop, he desires a good work. A bishop then must be blameless, the husband of one wife… Likewise deacons must be reverent… But let these also first be tested; then let them serve as deacons, being found blameless. Likewise, their wives must be reverent, not slanderers, temperate, faithful in all things. Let deacons be the husbands of one wife… For those who have served well as deacons…” (1 Tim. 3:1-13).
This quotation (with italics) is taken from the New King James Version®. Copyright © 1982 by Thomas Nelson. Used by permission. All rights reserved.

In this text, the term “bishop” is used twice, and it says he must be the “husband of one wife.” The term “deacon” is used four times, and it also says they must be “husbands of one wife.” Neither the term “bishop” nor “deacon” is used in connection with women. No office, work, or function is named for the gune in this text. It does not say “female deacons (or deaconesses) must be…”. It does not say “a deacon must be a married person.” It does not say, “female deacons must be the wife of one husband.” But the text does say, “Let deacons be the husbands of one wife.” It thus seems to me (and many others) that the official position of deacon is only for men with wives, and thus the gune in this text refers to the wives.

A Talk with Jesus

“James and John, the sons of Zebedee, came near to him, saying… ‘Grant to us that we may sit, one at your right hand, and one at your left hand, in your glory’… When the ten heard it, they began to be indignant towards James and John. Jesus summoned them, and said to them, ‘You know that they who are recognized as rulers over the nations lord it over them, and their great ones exercise authority over them. But it shall not be so among you, but whoever wants to become great among you shall be your servant (diakonos). Whoever of you wants to become first among you, shall be bondservant [ouch!] of all” (Mark 10:35-44).

Who is most important in the Lord’s church: pastors, deacons, bishops, evangelists, ministers, elders, preachers, or teachers? None of the above! It is the person who serves! Let’s get the world’s mentality out of the church and replace it with the mind of Christ!

Who is more important in the Lord’s church: men or women? Neither. The one who serves. Just as James and John coveted the top positions, so many today (both women and men) are fighting the same battle on various fronts. The church through the ages has been internally destroyed by the fight for authority. Let’s settle down and do it God’s way. He is the one who sets the rules – and the roles – not us.

Jesus’ pointedly clarified, “It shall not be so among you.” Jesus’ church is not to be run as governments and businesses are run. In Jesus’ church it is not about position and titles and being in charge. It’s all about serving. In short, if God has given to “husbands of one wife” the opportunity to have an official position of deacon – and has not given that to women – this in no way prevents women (and men) from being diakonos without title or office.

Which brings us back to Margaret’s booklet “Things Women Can Do in the Church.” No need for an official position. Male or female, just be a diakonos, a servant of Jesus and of His people.

Tags:Jesus' Church
previousInsight #283 — “Gender X”
nextInsight #285 — How Many Books Are in the Bible?