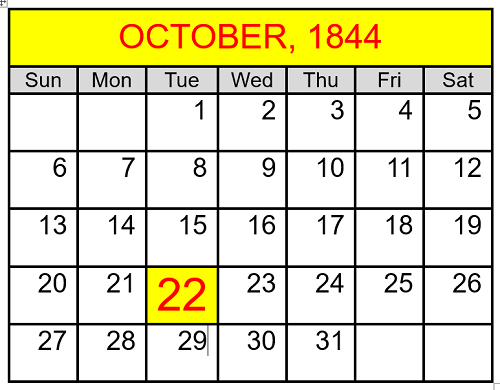 Countless times in the past two thousand years, false prophets have set dates for the Second Coming. Most often, the dates come and go and are forgotten. However, some prophets and their followers are so blinded, as well as creative, that they fabricate new doctrines around their failed dates. Such is the case with the Seventh Day Adventists regarding 1844.

William Miller, following his failed prophecy regarding 1843, predicted the Lord’s Second Coming would be on October 22, 1844. After this second failure, those who did not abandon the Adventists soon convinced themselves that they were right regarding the date but only wrong regarding the place.

The main text for the calculation of this date and for the “coming” is Dan. 8:14: “Unto two thousand and three hundred days; then shall the sanctuary be cleansed.” At least three basic errors are involved as Adventists wrench Dan. 8:14 out of context.

Error One:   Miller taught that the “sanctuary” in Dan. 8:14 is the earth, which Jesus was to cleanse with fire at His coming. When Jesus failed to return and many left the movement, the remaining Adventists latched onto the idea that in 1844 Jesus “came” to the heavenly sanctuary and cleansed it.

Reply:   Actually, fabrication existed before failure. Failure just changed the nature of the fabrication. Dan. 8:14 gives no hint that the sanctuary is either earth or heaven, nor does it say anything about a coming of Jesus. Rather, Dan. 8 is a prediction of a little horn (8:8-9) arising from a goat. Verse 21 says the goat is Greece. The sanctuary to be cleansed is the sanctuary that had its daily sacrifices taken away by that little horn of Greece (8:11). This sanctuary during the Grecian Empire can be nothing else but the temple of God that existed in Jerusalem.

Error Two:   Miller assumed that 2,300 days must be interpreted using the day-for-a-year rule.

Reply:   While it is true some prophecies are unlocked using the day-for-a-year key (Ezek. 4:6), it is not true that this key applies to all time prophecies. For example, Jesus predicted He would rise from the dead in three days (John 2:19-21). Nobody applies the day-for-a-year key to that prophecy. Neither can a day-for-a-year, and thus 2,300 years, be applied to Dan. 8, because the sanctuary it speaks of was totally destroyed in A.D. 70, centuries before 1844. You cannot cleanse what does not exist.

Reply:   While it is true that the seventy weeks of Dan. 9 begin in 457 B.C. [see Insight #44], this bears no relationship to the times predicted in Dan. 8. A simple reading of Dan. 8 shows that the 2,300 begin when the little horn takes away the daily sacrifices and casts down the sanctuary (8:11-14). The Grecian Empire, that defiled the sanctuary, did not come into power until 331 B.C., more than a century after the 457 date. The little horn (Antiochus Epiphanes) [Insight #145] did not begin desecrating the sanctuary until about 170 B.C., nearly three centuries after the 457 date. There is no relationship between the times predicted in the two prophecies.

A lot of disappointment and false doctrine would have been avoided if William Miller and his followers had studied the context of Dan. 8:14, had then studied history for its fulfillment, and had taken seriously the word of the Lord: “Watch therefore, for you know neither the day nor the hour wherein the Son of man comes” (Matt. 25:13).