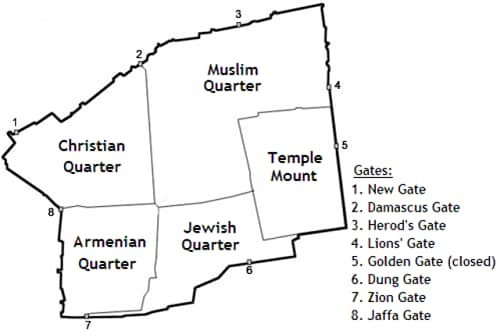 Jerusalem. Who controls it? Who owns it?

The status of Jerusalem is one of the major obstacles to peace in the Middle East. It is always among the last items for negotiation. Both the Israelis and Palestinians demand Jerusalem as their capital. However, the United Nations and many (or most) governments say Jerusalem should be an International City.

Didn’t the Israelis conquer East Jerusalem, including the Old City, in the Six-day War in 1967, and don’t they now claim undivided Jerusalem as their capital? Yes, but…

Before proceeding, what does all this have to do with prophecy? Much. When Jesus predicted the total destruction of Jerusalem and the temple (fulfilled in A.D. 70), he added this amazing prediction: “Jerusalem shall be trodden down of the Gentiles, until the times of the Gentiles be fulfilled” (Luke 21:24). Romans, Persians, Arabs, Crusaders, Turks, the British, Jordanians, and others trod down Jerusalem from A.D. 70 to 1967.

There are numerous ways to consider this question. Today, I would like to highlight one phase of the question. Who owns and controls the land in the Old City? Who lives there?

A recent report (2/11/2007) in the Washington Post puts the population of the Old City at 35,000. Of this total, only 9% are Jews, nearly all of whom live in the Jewish Quarter. When I first heard of the Armenian, Christian, Jewish, and Muslim Quarters, I assumed they were each one-fourth part of the city. However, it takes only a glance at a map of modern Jerusalem to see that “quarter” simply refers to a section of the city according to who lives there, without regard to size. The Christian Quarter is larger than the Jewish Quarter. The Muslim Quarter is at least twice as large. A rough calculation based on a National Geographic map before me shows that today’s Jewish Quarter is less than one-sixth of the entire Old City.

Non-Jews own/control most of the land in the Old City. Jewish settlers are attempting to gain a foothold, but at an agonizingly slow pace. While some branches of the Israeli government are trying to aid the process, other branches make it difficult. On the other side, Arabs willing to sell land to Jews in such areas as the Old City have even been murdered by their own countrymen.

In summary, the population, the land ownership, and the control of the Old City are today overwhelmingly in the hands of Gentiles. Can you imagine 90% of Jerusalem’s population in Solomon or Jesus’ day being composed of Philistines, Egyptians, and Syrians, with only 10% being Jews living in one corner of the city? This reality is just one of several reasons to conclude that the Old City (the Jerusalem of Jesus’ Day) is still “trodden down of the Gentiles” in the year 2008. If this is correct, “the times of the Gentiles” are not yet finished.
– – – – – – – – – – – –
P.S.: This topic is still an on-going investigation with me. If you have access to any additional or even contradictory information, please share it with me, along with the sources. Thanks.