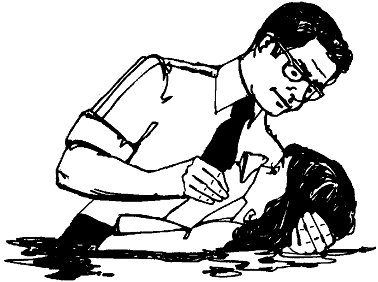 During a time of international insecurity, it is refreshing to reflect upon the eternal kingdom of God. God’s coming kingdom was a major theme of the prophets of Israel. Jesus, beginning His ministry, said He came to establish that kingdom. Did He do it? This issue is hotly debated. However, more important yet is the issue of who can enter the kingdom, whatever it’s timing and nature may be. Those who love God more than anyone or anything surely do not want to be left out.

In the dark of night, a Pharisee sought Jesus. What he had in mind we know not; but it is certain he was taken by surprise. After all, he was a religious leader of God’s chosen people, Israel. If Jesus had come to establish God’s kingdom, surely a Pharisee would obtain an important position. Quite the contrary, Jesus told Nicodemus that he might not even enter the kingdom. “Except a man be born again, he cannot see the kingdom of God” (John 3:3). What? Not even get in? And, what is this about being born again? “How can a man be born when he is old? Can he enter the second time into his mother’s womb, and be born?” (verse 4).

Most of us have heard of “born-again Christians” so often, we fully understand what Nicodemus did not. Or do we? First, please tell me what kind of Christian there is besides a born-again one. Second, just how is a person born again? We all understand, of course, that it is absurd to get back into our mother’s womb. We understand that this is something spiritual, that Jesus was expressing a drastic change of life. However, many people ignore Jesus’ own explanation to the Pharisee: “Except a man be born of water and of the Spirit, he cannot enter into the kingdom of God” (vs. 5). Whatever God’s kingdom is, only those who are “born of water and of the Spirit” enter.

The “kingdom question” is not just a prophetic curiosity. It is a question of the heart, of the soul. Nor does it concern a mere thousand-year earthly kingdom. It is a heavenly kingdom “which shall never be destroyed… and it shall stand for ever” (Dan. 2:44). The kingdom question is not a question of end-times-yet-to-be-fulfilled prophecy. It is a question of accepting the kingdom that Jesus has already established. Even Tim LaHaye, of “Left Behind” fame, who believes Jesus will return the second time to set up an earthly kingdom, says this of Jesus: “He came the first time to establish a spiritual kingdom, to which one gains entrance by being born again” (1). Amen! Precisely! Jesus’ kingdom is already established and we can enter it by being “born again.” Born “of water and of the Spirit,” that is.

Jesus clarified these words after his resurrection: “He that believes and is baptized shall be saved” (Mark 16:16). Shortly thereafter, the apostle Peter, being baptized in the Holy Spirit and possessing “the keys of the kingdom” (Matt. 16:19), further clarified: “Repent, and be baptized every one of you in the name of Jesus Christ for the remission of sins, and you shall receive the gift of the Holy Spirit” (Acts 2:38). The new birth in water and the Spirit takes place via faith, repentance, and baptism.

Some object to physical water being required for salvation. But think of this: If water is rejected because it is physical, what shall we say about blood? “Without shedding of blood is no remission” (Heb. 9:22). It was the eternal Word who was made flesh who set the terms for entrance into the Kingdom. It was King Jesus in the flesh who shed his physical blood for our sins. This is the King who told the Pharisee: “Unless one is born of water and of the Spirit, he cannot enter the kingdom of God.”