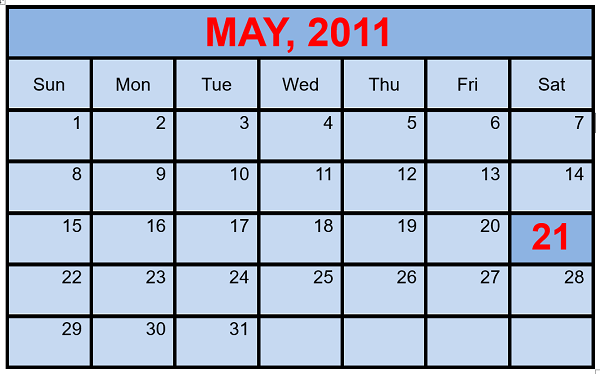 Nothing happened on May 21, 2011 — except that followers of Harold Camping were frustrated while he was “flabbergasted” and “looking for answers.” With mounting pressure, he gave his “answers” publicly Monday evening, the 23rd. He said his mistake was in viewing it all from a physical viewpoint. He continued to claim his whole dating system is correct, but that  May 21 was fulfilled in a spiritual sense. “We didn’t see any difference, but God brought Judgment Day to bear on the whole world.”

Take for example the prediction in Malachi of the coming of Elijah. Jesus said John the Baptizer fulfilled the prediction. (See Insights 29 and 79.) It was a spiritual fulfillment in the sense that Elijah himself did not come. Nevertheless, John was seen and heard by “all Judea” (Matt. 3:5), making a great impact in preparation for the Messiah, Jesus. Another example is the OT prediction of a coming kingdom. Many of us believe Jesus’ church is the fulfillment. A spiritual fulfillment, yes, in the sense that the kingdom is a spiritual one. Nonetheless, on Pentecost, A.D. 30, Jerusalem heard and saw a tremendous supernatural display (Acts 2). That day, a great movement began which, within years, “turned the world upside down” (Acts 17:6).

The only “spiritual” fulfillment Camping has even mentioned, to my knowledge, is of “Judgment Day.” He claims everyone is now judged and salvation is no longer possible. That’s a daring statement, which calls for God’s response: “When a prophet speaks in the name of the Lord, if the thing follow not, nor come to pass, that is the thing which the Lord has not spoken, but the prophet has spoken it presumptuously: you shalt not be afraid of him” (Deut. 18:22). Camping dared to speak in the name of the Lord when the Lord said nothing of the kind. Now, his claim that salvation is no longer available is nothing short of satanic.

Camping also predicted that on May 21 there would be world-wide earthquakes, throwing open graves, ushering in the Rapture. The best I can gather, Camping now says that these failed predictions will take place together with the end of the world. He continues to claim that the end will take place on Oct. 21, 2011. So, unless I have missed it, Camping claims neither a physical nor a spiritual earthquake or rapture on May 21 — he simply ignores this non-fulfillment. Contrary to his claim, his dating system is false.

As various brethren have pointed out, predicting dates for Jesus’ return and the end of the world is not only contrary to Scripture and futile; it also misguides the gullible and provides fodder for the mockers of Christianity. Rather than set dates, God’s message for us every day continues to be “Watch and pray: for you know not when the time is” (Mark 13:33).