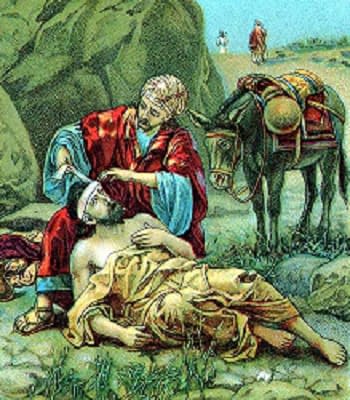 When a certain lawyer asked Jesus, “Who is my neighbor?” the lawyer was not seeking enlightenment. He was “desiring to justify himself” (Luke 10:29). He was trying to see whom he could leave out. The OT text on loving one’s neighbor as one’s self is Lev. 19:18. The immediate context is “the children of your people.” Fine. I’ll love my fellow countrymen. I’ll love those who share my religion. However, in the same chapter, verses 33 and 34 say: “If a stranger lives as a foreigner with you in your land, you shall not do him wrong. The stranger who lives as a foreigner with you shall be to you as the native-born among you, and you shall love him as yourself; for you lived as foreigners in the land of Egypt. I am Jehovah.”

Jesus replied to the lawyer with the well-known account of the good Samaritan. What were the implications? The Samaritan was a foreigner. He didn’t belong in Judah. I don’t know if he was there on vacation, on business, lived there, or what. But let’s get a feel for how this account would have hit the lawyer by bringing it up to date as if Jesus were in the USA answering this question. He would be telling about a man who was on the road between Baltimore and Washington, and he fell among thieves. A theological student saw him and passed by on the other side. A pastor saw him and passed by on the other side. But a Mexican, when he saw him, had compassion. And you know the rest. The story would be about “The Good Mexican.”

If “The Good Mexican” versus the theological student and the pastor gets under your skin, then you may have some idea of how the lawyer felt when Jesus contrasted the Samaritan with the priest and the Levite. Jesus was contrasting the native religious leaders with the foreigners they hated. The foreigner had it right.

So, in a graphic way, Jesus was emphasizing what the book of Leviticus, of all books, said. Leviticus is known for all kinds of ceremonial regulations. But in the midst of them were what Jesus elsewhere designated as the second most important commandment in the entire OT: “Love your neighbor as yourself.” According to Jesus, whoever is nearby and in need is my neighbor.

I am not talking about politics, immigration policy, our changing demographics, or the like. We are all immigrants or descendants of immigrants. This is true even of so-called “native Americans.” Their ancestors, sometime in the deep past, immigrated from the Fertile Crescent to the Americas. Whomever we consider to be “them” and not “us,” – wherever they have come from and whenever they came – we all belong to the same race. The human race!

Remember the Samaritan woman? Once when Jesus sent out the twelve to evangelize, he commanded them, “Don’t go among the Gentiles, and don’t enter into any city of the Samaritans. Rather, go to the lost sheep of the house of Israel” (Matt. 10:5-6). Yet on another occasion, Jesus and His disciples traveled through Samaria, and we have the famous “woman at the well.” The woman was surprised by Jesus’ request: “How is it that you, being a Jew, ask for a drink from me, a Samaritan woman?” John adds this note: “(For Jews have no dealings with Samaritans)” (John 4:9).

The twelve had gone into town to buy food, and upon their return they, too, were surprised: “They marveled that he was speaking with a woman; yet no one said, ‘What are you looking for?’ or, ‘Why do you speak with her?'” (4:27). Jesus was breaking social taboos. With Samaritans.

After Jesus’ death and resurrection and the descent of the Holy Spirit on the day of Pentecost, John had a change of heart, a change of spirit. When persecution drove many Christians from Jerusalem, the first place mentioned which then received the Word was Samaria. Soon John and Peter traveled there to pray for them and lay hands on them to receive the Holy Spirit. John was transformed from wanting to destroy his neighbor to wanting to save his neighbor.

Sometimes bad answers are given to good questions. But sometimes the questions are bad. That is the case when the lawyer asked Jesus, “Who is my neighbor?” Did you notice that Jesus did not answer the question? After Jesus told about the Good Mexican, I mean Samaritan, Jesus then turned the lawyer’s question on end.

Jesus asked the lawyer, “Which of these three do you think seemed to be a neighbor to him who fell among the robbers?” We know neither the name nor the nationality of the dying man. It did not matter. Jesus did not ask the lawyer if the dying man was someone’s neighbor. Jesus wanted to elicit who it was that acted like a neighbor to the man in need. Did you notice that the lawyer didn’t even reply, “the Samaritan”? Too difficult for him. He replied, “He who…”

So, let’s forget the questions about the other person, whatever the questions may be. Let’s ask the right question: Am I willing to be his/her neighbor? I’m talking to myself as well as everyone else. No claim of perfection here. A need for more love here. Yes, love. “Love your neighbor as yourself.” Let’s not ask if so-and-so is my neighbor. The right question is if I will be a neighbor to him/her.

We could spend time in the latter part of Romans 12, including “If your enemy is hungry, feed him.” We could spend time in the latter third of Matt. 25, including “I was a stranger, and you took me in… sick, and in prison, and you didn’t visit me.” In whatever way you and I may be loving our neighbors, let’s love them more. Jesus didn’t just tell a story. He ended with “Go and do likewise.”