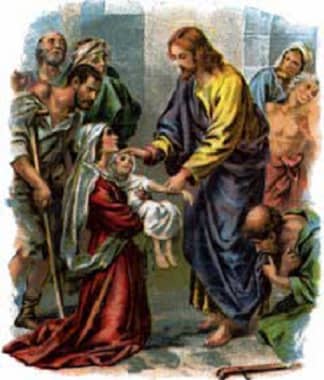 Can anyone today heal sickness and disabilities in the way Jesus and the Apostles did? This Insight is not about answered prayer. Nor is it an attempt to find a good definition for “miracle.” Rather, the question here is whether there exist men and women in modern times who have the same power to heal that Jesus and His Apostles had.

Main Purpose of Healing in the NT

Jesus spent a lot of time healing physical ailments. Why? For sure, one reason was compassion. “Jesus went out, and he saw a great multitude. He had compassion on them, and healed their sick” (Matt. 14:14). “Jesus, being moved with compassion, touched their eyes; and immediately their eyes received their sight, and they followed him” (Matt. 20:34).

Jesus also expressed another reason before healing: “‘But that you may know that the Son of Man has authority on earth to forgive sins’—he said to the paralytic— ‘I tell you, arise, take up your mat, and go to your house'” (Mark 2:10-11). Jesus healed the man to prove that He had the power to forgive sins.

Near the end of his Gospel, John tells us the purpose of Jesus’ miracles (signs): “Therefore Jesus did many other signs in the presence of his disciples, which are not written in this book; but these are written, that you may believe that Jesus is the Christ, the Son of God, and that believing you may have life in his name” (20:30-31).

When Peter preached the first gospel sermon, he introduced Jesus this way: “Men of Israel, hear these words! Jesus of Nazareth, a man approved by God to you by mighty works and wonders and signs which God did by him in the midst of you, even as you yourselves know” (Acts 2:22). Jesus’ miracles (works, wonders, and signs) showed He was approved by God.

Later in the same chapter, we are told that the Apostles worked miracles: “Fear came on every soul, and many wonders and signs were done through the apostles” (Acts 2:43). Since the Apostle Paul was not one of those chosen while Jesus was still on earth, it was vital for Paul to prove that he, too, was an Apostle of Jesus. Thus, he explained to the Corinthian brethren: “Truly the signs of an apostle were worked among you in all patience, in signs and wonders and mighty works” (2 Cor. 12:12).

The Gospel of Mark ends by saying: “They went out, and preached everywhere, the Lord working with them, and confirming the word by the signs that followed” (16:20). Years later, Hebrews 2:3-4 declared that the word of the gospel of salvation “was confirmed to us by those who heard; God also testifying with them, both by signs and wonders, by various works of power, and by gifts of the Holy Spirit, according to his own will.” The miracles were God’s way of confirming the word spoken by Jesus and His Apostles.

The interesting thing to me is that Jesus could have done other types of miracles, such as levitate, call fire from heaven, make a mountain move from one place to another. But Jesus rejected just putting on a show. Rather, He combined compassion with proving He was God’s Son. The texts cited above demonstrate that miracles of healing were not an end in themselves. Healing sickness is not what the good news is all about. Rather, Jesus and the Apostles miraculously healed people as a powerful way to prove they were sent by God.

Years ago, I had the opportunity to attend various campaigns sponsored by faith healers. In every case I was astounded – not by seeing miracles – but by the credulity of those attending.

For example, there was a man I saw supposedly healed of muteness. Even though the man spoke gibberish, he was proclaimed healed. When Jesus healed a man who was deaf and had a speech impediment, “immediately his ears were opened, and the impediment of his tongue was released, and he spoke clearly” (Mark 7:35). Spoke clearly vs. gibberish.

There was the woman on the stage who was declared cured of blindness, maybe legal blindness. We saw her later in the foyer with her glasses on again and asked her why. She said she couldn’t see too well. When Jesus healed a blind man, he “saw everyone clearly” (Mark 8:25).

I saw a man in a wheelchair at the foot of the stage calling out, “Brother Osborn, brother Osborn.” As people on the stage took turns giving testimonies of unseen miracles, Mr. Osborn totally ignored the man in the wheelchair. It reminds me of the time Jesus was leaving Jericho. Two blind men were crying out to Jesus to have mercy on them. The crowds told them to be quiet. But Jesus called for them to come to him and gave them their sight (Matt. 20:29-34). What a difference between someone who can really heal and someone who only knows how to manipulate crowds!

I saw a man brought on a stretcher when the meeting had just ended. He and those with him desperately sought healing. They were told they would have to fill out a card and come to a meeting the following afternoon in order to take part in the healing meeting the next evening. No amount of pleas could change the plan. Of Jesus it is said that “great multitudes followed him; and he healed them all” (Matt. 12:15). Of the Apostles it is said: “Multitudes also came together from the cities around Jerusalem, bringing sick people, and those who were tormented by unclean spirits: and they were all healed” (Acts 5:16).

Modern healers all have their method. Methods differ with each healer. One healer will have workers divide people into two lines: a healing line and a prayer line. Another healer will have preparation meetings in the afternoon for the evening event. Another will not heal any on stage but will heal people where they are seated, then ask them to come forward and give their testimony. They all heal in announced meetings, not as they walk through town. Jesus and the Apostles did not have a method. They had the power. Just read the Gospels and Acts. They healed in all kinds of situations and in various ways.

Rather than offer more and more contrasts, I will simply say that no one has been able to point out to me any man or woman today who can heal sickness and disability in the way Jesus and the Apostles did.

Satan Can and Does Work Miracles

We need to take this one step further. There is a huge difference between “all are healed” and “some are healed.” Not only huge, but hugely important.

Let’s begin 3,500 years ago in Egypt. When God commissioned Moses to face Pharaoh on behalf of the enslaved Israelites, God gave Moses three signs/miracles to prove he had a divine mandate. First, God told Moses to throw down his rod. It turned into a snake. Second, God told Moses to pick up the snake by the tail. It became a rod again. Then God gave Moses the reason for the miracle: “That they may believe that Jehovah, the God of their fathers, the God of Abraham, the God of Isaac, and the God of Jacob, has appeared to you” (Ex. 4:5).

God gave Moses a second miracle/sign. By putting his hand in his cloak and pulling it out, it became leprous. Doing it again, his hand returned to normal. Then God said: “It will happen, if they will neither believe you nor listen to the voice of the first sign, that they will believe the voice of the latter sign. It will happen, if they will not believe even these two signs, neither listen to your voice, that you shall take of the water of the river, and pour it on the dry land. The water which you take out of the river will become blood on the dry land” (Ex. 4:8-9).

Various NT texts offer a strong warning to be on our guard against powers which may be supernatural but not divine.

The Holy Spirit predicted the “man of sin… whose coming is according to the working of Satan with all power and signs and lying wonders” (2 Thess. 2:3-9). “The man of sin” works miracles.

“For there will arise false christs and false prophets, and will show signs and wonders, that they may lead astray, if possible, even the chosen ones” (Mark 13:22). Our relationship with God can be ruined if we let ourselves be deceived by false prophets working miracles.

Do not seek for nor trust the “half miracles” which today are deceiving many credulous and naive souls. Rather, read and study the Holy Scriptures more carefully. A good beginning place is Matthew 7:21-23: “Not everyone who says to me, ‘Lord, Lord,’ will enter into the Kingdom of Heaven; but he who does the will of my Father who is in heaven. Many will tell me in that day, ‘Lord, Lord, didn’t we prophesy in your name, in your name cast out demons, and in your name do many mighty works?’ Then I will tell them, ‘I never knew you. Depart from me, you who work iniquity.’