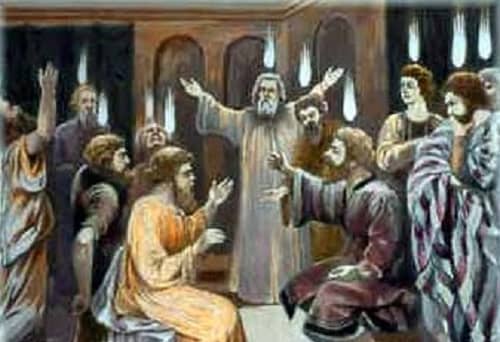 Seven weeks after Jesus was crucified outside Jerusalem’s walls, amazing things happened within the walls. A multitude of Jews who had gathered for Pentecost heard a powerful wind but felt nothing. When they discovered the source of the sound, they were amazed. Uneducated Galileans began speaking in the various native languages of the pilgrims. Not only that, but it looked like the Galileans had flames of fire on their heads.

Now that God had gotten the attention of thousands of Jews, the Apostle Peter got up to explain what was going on. The crucified Jesus had risen from the dead, had ascended into heaven, and had sent the Holy Spirit. Peter declared: “God has made him both Lord and Christ, this Jesus whom you crucified.”

That particular Pentecost, as recorded in Acts 2, is one of the most important days in history. It was a major turning point in God’s dealings with mankind. It evokes a discussion of various vital issues, two of which will be the focus of this Insight.

Who Were Baptized in the Holy Spirit?

There are various views regarding those who were baptized in the Holy Spirit that day. Was it 12, 13, or 120? The text does not specifically say. Acts 2:1-4 repeatedly mentions “they” and “them” without specifying who. Shall we therefore just ignore the question? I think not. In the first place, there are major clues. In the second place, there is the purpose of this extraordinary event.

Let’s begin with evidence for the twelve Apostles. At the Last Supper, we are told, “He was reclining at the table with the twelve disciples” (Matt. 26:20). Among other things that night, Jesus explained to the Twelve: “I have yet many things to tell you, but you can’t bear them now. However when he, the Spirit of truth, has come, he will guide you into all truth” (John 16:12-13).

The book of Acts begins by telling us that before Jesus ascended into heaven, He appeared to the “apostles whom he had chosen” and “commanded them, ‘Don’t depart from Jerusalem, but wait for the promise of the Father, which you heard from me. For John indeed baptized in water, but you will be baptized in the Holy Spirit not many days from now'” (Acts 1:2-5). Jesus specified three things: 1) they had to stay in Jerusalem; 2) they were going to be baptized in the Holy Spirit; and 3) it would happen in a few days.

To gain insight into who “they” were in chapter 2, let’s join the last verse of chapter 1 with the first verse of chapter 2, “They drew lots for them, and the lot fell on Matthias, and he was numbered with the eleven apostles. Now when the day of Pentecost had come, they were all with one accord in one place.” The immediate antecedent of “they” who were baptized in the Holy Spirit is Matthias plus the other eleven apostles.

Everyone knows that the twelve apostles were baptized in the Holy Spirit that day. The real question is if there were others.

There are those who would add Mary the mother of Jesus as another one who was baptized in the Holy Spirit that day. Evidence? There is none. Nowhere is that promise given to her, nor is there any text that would hint at the idea. Make no mistake about it: Mary is one of the most blessed women in all history. Twice she was told, “Blessed are you among women.” First, by the angel Gabriel. Later, by Elizabeth when filled with the Holy Spirit (Luke 1:28, 42). What a tremendous blessing to be the physical mother of Jesus.

However, following Acts 1:14, we have absolutely no information about Mary. Whereas the activities and importance of the Apostles is mentioned over and over again, there is total silence about any activities or importance of Mary aside from being the woman God chose to bring His Son into the world. There is no biblical reason for including her with the twelve as being baptized in the Holy Spirit that day.

Acts 1:15 tells us that “about one hundred twenty” “disciples” were gathered to choose an Apostle to replace Judas Iscariot. That is the first and last time in all Scripture that any reference is made to these 120 disciples. There is no record that they were promised the baptism in the Holy Spirit. They are not described as having any position or function in the church. They were just present one day between Jesus’ ascension and Pentecost. They are not mentioned on the day of Pentecost or any time after that.

In contrast to Mary and the 120, none of whom are mentioned in Acts 2, the Apostles are specifically mentioned four times. In 2:14: “Peter, standing up with the eleven, lifted up his voice.” In 2:37: The crowd “said to Peter and the rest of the apostles, ‘Brothers, what shall we do?'” In 2:42: “They continued steadfastly in the apostles’ teaching.” In 2:43: “Many wonders and signs were done through the apostles.” How can anyone miss the importance of Jesus’ Apostles on that day and the days that followed?

The Reason for the Baptism in the Holy Spirit

As we have seen, at the Last Supper Jesus told the Apostles that He had many more things to tell them. But there was a problem: “You can’t bear them now” (John 16:12). There was so much the Apostles did not know at that time. They had no concept of why He had to die. And whenever He told them that after His death He would rise again, it did not sink in. The very heart of the gospel is the death, burial, and resurrection of Jesus. The Apostles’ understanding of all that was zero. Jesus continued with an extremely important “however”: “when he, the Spirit of truth, has come, he will guide you into all truth” (16:13).