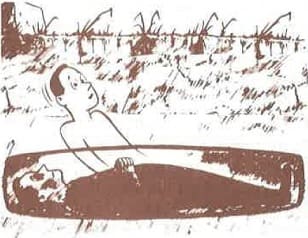 Well, of course, you can take a driver’s test over and over, with the specifics depending on where you live. And your eternity-destination test? Well, you have a lifetime of opportunities for that. But what if one lifetime is not enough? How about another chance? How about coming back in a different body to try all over again?

It’s called reincarnation or transmigration of the soul. Millions, perhaps billions believe in it. This includes especially the Hindus of India. But there are many others, including those who believe the Bible teaches it. And that’s what this Insight is about. Does the Bible teach reincarnation?

Elijah and John the Baptist

Four hundred years before Christ, the OT closes this way:
“Behold, I will send you Elijah the prophet before the great and terrible day of Jehovah comes. He will turn the hearts of the fathers to the children, and the hearts of the children to their fathers, lest I come and strike the earth with a curse” (Mal. 4:5-6).

Coming down from the Mount of Transfiguration, Jesus replied to a question by Peter, James, and John: “‘I tell you that Elijah has come already, and they didn’t recognize him, but did to him whatever they wanted to. Even so the Son of Man will also suffer by them.’ Then the disciples understood that he spoke to them of John the Baptizer” (Matt. 17:12-13).

Elijah came but people didn’t recognize him, because he was reincarnated in the body of John. There you have it. Or do you? Let’s look more closely.

Who was right? Jesus or John? It is difficult to accept the idea that Jesus and John contradicted one another. How could that be? The angel Gabriel had already solved the problem when he told John’s future father: “Elizabeth will bear you a son, and you shall call his name John… He will go before him in the spirit and power of Elijah, ‘to turn the hearts of the fathers to the children'” (Luke 1:13, 17). The last expression is a direct quotation of Malachi’s prophecy. Thus, Gabriel was saying that John the Baptist was the fulfillment of the Elijah prophecy. John came – not as Elijah himself – but “in the spirit and power of Elijah.”

Gabriel’s statement that John would come “in the spirit and power of Elijah” explains the seeming contradiction between Jesus and John. Jesus said “yes,” because John was the fulfillment of the prediction in a figurative or spiritual sense. John answered “no,” because he was not literally Elijah. There is no argument here for reincarnation if we take into account what both Jesus and John said and then tie them together with Gabriel’s explanation: “in the spirit and power of.” But let’s dig deeper.

The shortest, clearest Scripture that refutes reincarnation is Hebrews 9:27: “Inasmuch as it is appointed for men to die once, and after this, judgment.” Man has only one life on earth. He dies only once. Rather than reincarnate, he faces judgment.

Like many rules, there are exceptions to this “rule.” Enoch and Elijah never died at all. Lazarus and a few others were raised from the dead, and we assume all but Jesus died again. I haven’t heard of anyone living today who is two thousand years old, have you? So, yes, there are a few exceptions one way or the other, but the exceptions do not nullify the rule: “it is appointed for men to die once.” In eight plain words the multiple lives with multiple deaths of reincarnation are refuted.

When we face the fact that we live only once in this world, we then just might take life more seriously and prepare for death – not for our funeral and burial – but for the judgment that follows death. It’s not what people say at our funeral that matters; it’s what the Judge of the world says.

Reincarnation teaches that the process of gradual purification and enlightenment takes place by utilizing as many lives on earth as necessary until a person is finally absorbed into what is called Nirvana. Whether people realize it or not, the underlying attraction of reincarnation is that it eliminates the fear of the judgment of God following death. It eliminates the sobering realization that one day we must all come face to face with our Creator to give an account of ourselves.

An unknown author expressed this truth in a well-known saying:
Only one life, ’twill soon be past;
Only what’s done for Christ will last.

Who Needs a Savior?

The gospel message is diametrically opposed to that scenario. “All have sinned… the wages of sin is death… apart from shedding of blood there is no remission… Christ died for our sins… for by grace you have been saved through faith, and that not of yourselves; it is the gift of God… all people everywhere should repent, because he has appointed a day in which he will judge the world… Repent, and be baptized, every one of you, in the name of Jesus Christ for the forgiveness of sins… you were redeemed… with precious blood… the blood of Christ” (Rom. 3:23; 6:23; Heb. 9:22; 1 Cor. 15:3: Eph. 2:8-9; Acts 17:30-31; Acts 2:38; 1 Pet. 1:18-19).

In reality, only the Creator of the world can possibly have the knowledge of what transpires after death. A wise man or woman will listen to what God says. Who needs a Savior? You do. I do. “it is appointed for men to die once, and after this, judgment.”