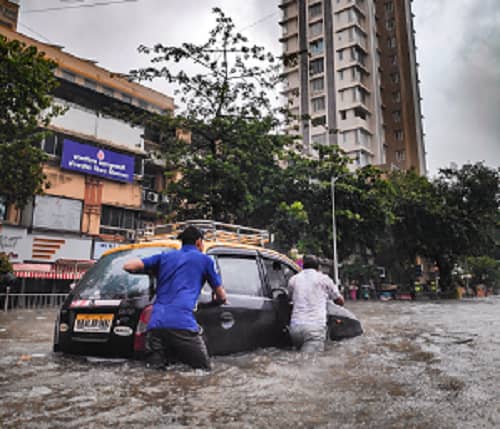 Who’s in charge of the universe? “God’s in charge,” Christians confidently affirm – even when the going is tough. Whatever happens is God’s will, right? Well, let’s explore that.

We make plans; we are confident of success. But Scripture reminds us that “you don’t know what your life will be like tomorrow. For what is your life? For you are a vapor, that appears for a little time, and then vanishes away. For you ought to say, ‘If the Lord wills, we will both live, and do this or that'” (James 4:14-15). If the Lord wills! Not our will, His will. But, what does that mean exactly? Upon reflection, there are two ways to look at it. Does it mean if the Lord desires, or if the Lord permits?

Surely, all believers would agree that God can do whatever He wants to do. Who are we to put limits on God? But what if God puts limits on Himself? Did God create us as puppets? Was it God’s plan for a gunman to kill 26 in a church in Texas?

It all began in the Garden of Eden. God told Adam and Eve to abstain from one tree. He didn’t want them to eat of it. However, God added: “In the day that you eat of it you will surely die” (Gen. 2:17). Two things are clear. God gave Adam and Eve the power of choice. But God also reserved to Himself the last word.

Scripture says, “For this is the will of God: your sanctification, that you abstain from sexual immorality” (1 Thess. 4:3). Does everyone always abstain from sexual immorality? Absurd question! God’s will is not done when a man cheats on his wife. It is not God’s will that two people live together without being married. God allows these sins, but that is not what He wants.

“For this is the will of God, that by well-doing you should put to silence the ignorance of foolish men” (1 Peter 2:15). God’s will is that we do good. It is not His desire that we do evil. Much that happens daily is not God’s will – in the sense that it is not what He desires. Be it theft, rape, or war, much evil takes place because it was God’s will to grant free will to all of us.

A more difficult question relates to the awful things that happen in nature: hurricanes, earthquakes, drought. Scripture often records occasions when God did cause natural disasters. We know that is so, because inspired men of God have told us. Without living inspired prophets of God, it is presumptuous for any of us to affirm that such and such a tragedy was sent by God.

When God created the world, it was all “very good” (Gen. 1:31). Mosquitoes, earthquakes, and E. coli very good? Well, Genesis chapter one is not the end of the story. When Adam and Eve sinned, God declared, “Cursed is the ground for your sake… Thorns also and thistles will it bring forth” (Gen. 3:17-18).

But is God up in heaven manipulating every gust of wind, every tremor, every shark? I know of no Scripture to uphold such an idea. In fact, there is at least one time in history when it was Satan who caused slaughter, fire, and destructive wind. The case of Job. When these things happened to Job, Job had not the slightest idea that Satan was behind it all. Yes, God permitted it, but it was Satan’s desire and instigation.

All the natural disasters that happen are God’s will in the sense that He permits them. But to what extent does God desire this or that specific disaster? Without having inspired prophets today, we simply do not know. It is clear that God set in motion the curse of His creation. But none of us can pretend we know to what extent God does or does not intervene in specific situations.

It seems to me that some ailments happen simply because the creation has been cursed. On the other hand, let’s not forget that many of our physical ailments are the result of our choice and/or the choice of others to do evil. Think of sexually transmitted disease, cancer from smoking, cirrhosis of the liver from drinking, birth defects from the mother’s drug use, health problems from bad eating habits, one person’s drinking causing the death of another, and on and on. Who would want to say that any of these things are what God desires? We live in a fallen world, both cursed by God and filled with people who choose to do evil.

But there is more about God’s working in our lives. The same chapter that speaks of the whole creation groaning, triumphantly declares: “We know that all things work together for good for those who love God, to those who are called according to his purpose” (Rom. 8:28). This verse does not say that all things are good. They are not. Rather, “all things work together for good” – and it’s “for those who love God.” And if we truly love God, we will strive to see the “good” from God’s perspective, not ours.

Another example of God’s working in this free-will world is that “God… tempts no one” (James 1:13). Couple that with 1 Cor. 10:13: “God is faithful, who will not allow you to be tempted above what you are able.” God tempts no one. He allows Satan to tempt us, but He puts a limit on those temptations. Praise God!

Through all that takes place, we badly need the heart of Job. Just as Job was in the dark regarding what happened to him, so are we often in the dark. But Job was right in his attitude: “‘Naked I came out of my mother’s womb, and naked shall I return there. Jehovah gave, and Jehovah has taken away. Blessed be the name of Jehovah.’ In all this, Job did not sin, nor charge God with wrongdoing” (Job 1:21-22). Job didn’t know what was going on behind the scenes. Let’s just accept that everything that happens is God’s will, either being His desire, or being what He permits. We don’t need to know the “why” of everything that happens. We just need to be like Job and praise the Lord anyhow!