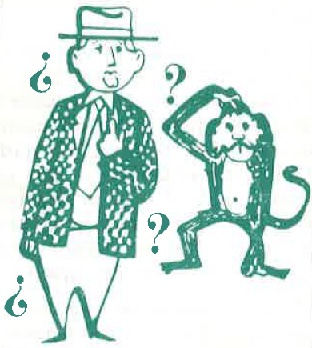 They’re trying to make a monkey out of you. In the name of science, we are told that we are prodigy monkeys. Well, not exactly. The nebulous term common ancestor is used. The fact remains that you (and I) are placed in the same biological order as chimpanzees, gorillas, baboons, and monkeys.

The common ancestor is usually sought in bone fossils. Yes, humans have many bone similarities to chimpanzees. But humans have similarities to all mammals in various ways: bone structure, digestive systems, respiratory systems, DNA, and more. We all breathe the same air, drink the same water, eat much of the same food. Digging up bones will not produce a common ancestor. The gap is not in anatomy. It is elsewhere.

I am no scientist. However, I do think I have a measure of common sense. Many of the things I shall discuss here are so simple and so basic that we usually don’t even think about them. But when we are told that we are closely related to chimpanzees, it is time to step back and take a reality check.

When was the last time you visited a zoo where chimps had different ethnic groups of humans in separate cages: Hutu, Italian, Aborigine, Inuit, Tibetan, Malaysian, Kurd, and French?

We talk of endangered species. In danger of whom? Humans. Humans decided if wolves should be allowed in Yellowstone National Park. It is not the wolves that decided if humans could visit Yellowstone. Multiple species have been wiped out due to human territorial expansion. No animal is taking over territory by wiping out the human population. All this is so obvious we don’t even think about it. But we need to take it into consideration when we contemplate the difference between humans and all animals.

When was the last time you saw a pack of dogs putting humans on leashes and training them to do tricks? Absurd! And humans not only train dogs to do tricks, they train them to sniff out drugs, explosives, and life in wreckage. Humans not only train parrots to repeat words and phrases, they train parrots to distinguish objects and colors. Humans have taught mice to press a specific lever for food and have taught gorillas to use sign language.

Different animals, by nature, possess different capabilities. It is humans who possess the ability to both discover these capabilities and harness them. We teach animals to do what they would never do on their own. It seems to me that people training animals shows the intelligence of humans more than showing the intelligence of the animals.

And then there is environment. Animals either adapt or move to more favorable environments. Humans, on the other hand, modify and change the environment in multiple ways. We can turn a forest into a grassland or a farm or a city. We build highways, railroads, airports, skyscrapers, factories, hospitals, university campuses, and stadiums. The list is endless. By our intelligence and abilities, we have changed the face of the planet. Humans are in charge, not animals.

Oh, the beavers? But beavers do what beavers do, period. They cut down trees, make dams, and make lodges. Amazing. But that’s it. It’s all by instinct. No new projects dreamed up. No advancement in technology.

Animals flee fire. They cannot make fire, use fire, or extinguish fire. Fire is their enemy. With us the story is totally different. Sure, fire can be an extremely powerful enemy. Think Twin Towers and the Thomas Fire in California. However, mankind is not helpless in the face of fire as are all animals. Men have many means of combating fires, controlling fires, and extinguishing fires.

Far beyond controlling destructive fires, we humans utilize fire in a multitude of ways. What lion ever cooked his catch before eating it? What polar bear ever made a campfire to get warmed up? With fire, people can smelt ore, fashion instruments, produce light, and heat dwellings, to name a few.

The only use that animals have of fire is when the fire is under man’s control. Picture Fido curled up in front of the fireplace. Animals have neither the physical nor mental abilities to harness fire. Making and utilizing fire is evidence of a great gulf between animals and humans.

Some animals have amazing capacities. Cheetahs can run up to 60 mph. Alpine swifts can fly 200 days non-stop. Sperm whales can dive and stay under water for 90 minutes. All these capabilities are beyond human capacity.

But – animals can do what they can do, and that’s it. Each type of animal can do what it is born to do. Its ancestors did the same, and its offspring will do the same. From ants to bees to bats, each creature has various interesting and even amazing characteristics, but what they were born with they die with.

Not so with the human race. No human can run at 60 mph, but humans make vehicles that travel on land over 300 mph. Humans cannot fly, but we have made airplanes to fly all over the world and space craft to fly to the moon. Humans cannot stay under water unaided for 90 minutes, but we have produced submarines that allow us to remain under water for over 3 months.

Humans are totally separated from the animal world in their collective mental capacity to not only invent complicated machines but to fabricate and control them. There is a great gulf between mankind and all animals that is not accounted for by subtle differences in bone structure or variations in DNA. There is something here beyond the physical.

Did you ever think about why only humans wear clothes? Of course, you may have seen a dog with his coat, or a chimp in the circus all dressed up. But this clothing is all done by humans.

Animals don’t wear clothes. They don’t cover any part of their bodies. They urinate and defecate anywhere at any time, hiding nothing. They have intercourse out in the open. Nobody feels any shame in filming documentaries of elephants copulating. To film humans like that is pornography.

Humans are totally different creatures from animals. Sure, some people have no shame. A few even live in nudist colonies. And we live in a society that uncovers more and more of the body. Still, even at the beach, most humans at least wear something.

Only humans experience shame in urinating, defecating, and copulating out in the open for all to view. There is something here that has nothing to do with bones or DNA. There is a spiritual element here that demonstrates a drastic difference between humans and all animals.

It is common knowledge that animals can communicate in a variety of ways. Fido can tell you when he needs to go outside. Tiger can tell you when she is hungry. Worker bees dance to tell their fellow bees where the good nectar is. Then there are wolves, prairie dogs, dolphins, ants, and the list goes on.

Oh, parrots? Who isn’t intrigued listening to a parrot? Or embarrassed when the parrot comes out with vulgar language. And isn’t it interesting that, of all the animals, only select birds can imitate human speech? Since speech is one of the most distinguishing marks of humanity, why not consider that humans evolved from a common ancestor with parrots? In all seriousness, there is more than bones and DNA involved in the difference between mankind and all animals.

Human speech is a different kind of communication than that of animals. Animal gestures and sounds relate to the “here and now.” Animal communication is context driven, relating to the current environment. Whether it be a desire for food, a desire to mate, a warning, a specific request, or what have you, animals communicate much like a little girl rubbing her tummy or a teenage boy whistling at a passing girl.

Not so with human language. Human language is complex. It is more than communication. It is conversation. Take this Insight as an example. We are discussing ideas. Humans can discuss the past, the present, and the future. We can talk about things present, things absent, and even imaginary things. We discuss concepts. You can teach Fido many commands, but you can’t sit down and have a two-way conversation with him regarding dog evolution. Not even with a chimpanzee.

Human conversation is in a different class than animal communication. Not to mention reading and writing. Not to mention schools, clubs, and churches. Via human language, spoken and written, information and ideas are passed on from one person to another and from one generation to another, so that the total body of human knowledge increases. One generation becomes capable of doing new things which were impossible to former generations. No animals can pass on information in this manner. Humans are not highly developed animals. Humans possess totally different capabilities and possibilities.

These and many more characteristics are testimony to the truth of Scripture: “God said, ‘Let us make man in our image, after our likeness: and let them have dominion over the fish of the sea, and over the birds of the sky, and over the livestock, and over all the earth…’ God created man in his own image” (Gen. 1:26-27). And to that must be added: “God is spirit” (John 4:24).

Yes, humans have many of the same physical characteristics as animals, most notably the chimpanzee. However, since God is spirit and we are made in His image, we are not only physical beings, we are also spiritual beings. It is that mental/spiritual component, demonstrated in the ways discussed, which place a great gulf between humans and all animals. No, we are not prodigy monkeys. We have been created in the image of God!