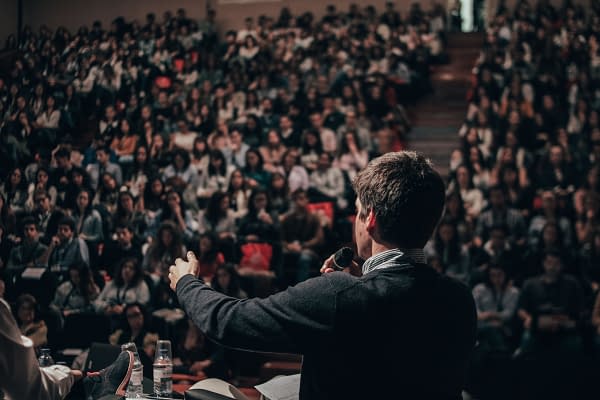 … the body of Christ.

Jesus, the eternal Word of God came to earth in a human Jewish body (John 1:1, 14). After 33 years in the body, He died, arose, and ascended into heaven. And now? The Father “gave him [Jesus] to be head over all things for the church, which is his body” (Eph. 1:22-23). Amazing! Today the church is Jesus’ body. What an intimate relationship. We are Jesus’ hands, arms, feet, and heart! A person who thinks, “I just need Jesus; I don’t need the church,” is describing a head that has no body. Gruesome!

1 Cor. 12:12-27 is a beautiful description of Jesus’ body today and how the members interact with one another. The section ends saying, “You are the body of Christ, and members individually.” That’s what the church is.

The word translated “church” from the Greek is ekklesia (Strong’s #1577). Before Jesus, the Greek term meant “an assembly of the citizens regularly summoned” or “a gathering of citizens called out from their homes into some public place.” In short, the word is correctly translated “gathering” or “assembly.” Some say that the word “church” in the original means “the called-out ones” because it is made up of two Greek words: “out of” and “called.” Yes, we are called out of the world. Yes, “called out” or “summoned” is in the word as the above definitions indicate. But the original word ekklesia has nothing to do with leaving a sinful world. It means called out or summoned to gather, to assemble.

Since ekklesia is the most common term Jesus chose for His church, this tells us that assemblies, meetings, congregating, getting together is one of the most basic characteristics of the church. What a blessing to regularly gather with those of like precious faith! When a person says, “I am a Christian but I don’t attend church,” they are contradicting themselves. The followers of Jesus will regularly find themselves in the assembly. That’s what the church is.

… the saved, the sanctified.

Paul wrote “to the church of God which is at Corinth; those who are sanctified in Christ Jesus” (1 Cor. 1:2). The church is those who are sanctified, consecrated, purified, made holy. “We have been sanctified through the offering of the body of Jesus Christ” (Heb. 10:10). Cleansed by the blood. Sins forgiven. Saved. “Christ also loved the church, and gave himself up for it [He died on the cross]; that he might sanctify it” (Eph. 5:25-26). Jesus died for the whole world? Yes, but His death is of no value to those who reject or ignore it. So, the most meaningful thing is that Jesus died for the church. Bless His Name!

Being saved and being a part of the church are not two separate things. You don’t “get saved” and later “join a church.” That’s a prevalent, but false, concept. “The Lord added to the church day by day those who were being saved” (Acts 2:47). When people are saved, God adds them to His church. It’s not something men can do. Decades ago a man told me he wanted to be baptized but did not want to be a part of the church. I tried to explain to him that that was not possible. As Paul explained, “in one Spirit we were all baptized into one body” (1 Cor. 12:13). We are not only baptized into Christ, we are baptized into His church, the body of those who are saved, sanctified. That’s what the church is.

… the temple of God.

The temple in Jerusalem was destroyed by the Romans in A.D. 70. Even if the Jews ever build a temple again on the Temple Mount in Jerusalem, it will not be God’s temple. Rather, it will be a slap in the face of Jesus, a rejection of His sacrifice on the cross for our sins. “It is impossible that the blood of bulls and goats should take away sins” (Heb. 10:4). After God tore the veil of the temple in two when His Son died, the stone temple is never again referred to as the temple of God.

God has changed temples. Paul told the Corinthian church: “You are the temple of the living God. As God has said: ‘I will dwell in them and walk in them'” (2 Cor. 6:16). God’s temple today is us. If we are in Christ, Christ is in us! The Holy Spirit told the Ephesian church that they were “built on the foundation of the apostles and prophets, Christ Jesus himself being the chief cornerstone; in whom the whole building, fitted together, grows into a holy temple in the Lord; in whom you also are built together for a habitation of God in the Spirit” (Eph. 2:20-22). “Building… holy temple… habitation of God.” Imagine: God dwelling in us! That’s what the church is.

… the household of God.

Moving from the building concept to those in the building, the words preceding the text just quoted are: “You are no longer strangers and foreigners, but you are fellow citizens with the saints, and of the household of God” (Eph. 2:19). We read in the NT of the household of Cornelius, of Lydia, of Crispus, of the Philippian jailer, of Caesar, among others. But here we are speaking of the household of God Himself. What a privilege! What a blessing! Not a stranger to God Almighty. Part of His household. Individually servants of God and even sons and daughters of God and all together God’s household. That’s what the church is.

“But you are a chosen race, a royal priesthood, a holy nation, a people for God’s own possession” (1 Pet. 2:9). The Jews used to be the chosen nation. No longer. “For you are all children of God, through faith in Christ Jesus. For as many of you as were baptized into Christ have put on Christ. There is neither Jew nor Greek… for you are all one in Christ Jesus. If you are Christ’s, then you are Abraham’s seed and heirs according to promise” (Gal. 3:26-29). If we are in Christ, we – not unconverted physical Jews – are the descendants of Abraham, God’s chosen people, God’s holy nation. What a blessed privilege!

That’s why we are told “as foreigners and pilgrims, to abstain from fleshly lusts” (1 Peter 2:11). “Our citizenship is in heaven” (Phil. 3:20). “This world is not my home, I’m just a passing through.” As a church, we are God’s nation. That’s what the church is.

… the pillar and ground of truth.

Paul said he wrote to Timothy “that you may know how men ought to behave themselves in the house of God, which is the church of the living God, the pillar and ground of the truth” (1 Tim. 3:15). We live in an age when people question if there even is such a thing as absolute truth. God’s church is in the world to proclaim, “Yes!” As a matter of fact, Jesus said it. “I am the way, the truth, and the life. No one comes to the Father, except through me” (John 14:6). Narrow-minded? Absolutely. As narrow-minded as the pharmacist who filled your prescription.

A leading characteristic of false churches, not to mention false religions and false philosophies, is stated in 2 Thess. 2:10: those who “didn’t receive the love of the truth.” “For the time will come when they will not listen to the sound doctrine, but, having itching ears, will heap up for themselves teachers after their own lusts; and will turn away their ears from the truth, and turn aside to fables” (2 Tim. 4:3-4). How vital! “The truth will make you free” (John 8:32). The church is not a place for itching ears. It is a place to take a stand for truth. That’s what the church is.

Jesus’ church is also the Kingdom of God, which is a huge topic by itself.  See Kingdom Series and Other Kingdom Prophecies.

Tags:Jesus' Church
previousInsight #279 – Time Budget
nextInsight #281 – Where Did Cain Get His Wife?