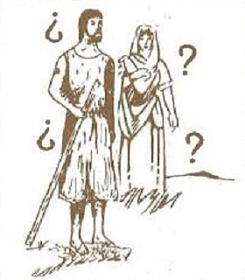 Many people raise interesting questions regarding Cain’s wife, questions that may seem difficult to answer. Some people think the questions cast doubt on the credibility of the Bible. Others don’t doubt the Bible, but they remain perplexed.

Where did Cain get his wife? Cain, Abel, and Seth are the only children of Adam and Eve who are named in Genesis. But these three named were by no means the only children of Adam and Eve. Genesis 5:4 says that Adam “became the father of sons and daughters.” Nobody knows how many children they had, but it appears that when Cain killed Abel there were numerous people alive. Why? Because of Cain’s complaint. “It will happen that whoever finds me will kill me” (Gen. 4:14).

Scripture is clear that we all descended from Adam and Eve. The NT agrees with the OT that “the first man, Adam, became a living soul” (1 Cor. 15:45). Genesis 3:20 tells us that Eve “was the mother of all living.” Paul told the Athenians that God “made from one blood every nation of men to dwell on all the surface of the earth” (Acts 17:26). We all descended from Adam and Eve.

Since there is no other source of human life, we are left with the reality that Cain (and his brothers) had to marry sisters (or nieces). Since some people find that difficult to accept, they ask a related question.

Didn’t Cain Find His Wife in the Land of Nod?

Some would suggest that when Cain traveled to Nod he found a woman to marry – a daughter of some unknown parents. However, the Bible does not say that Cain found a wife in Nod. In addition to the evidence already seen that Adam and Eve are the sole source of all human life, we need to carefully consider what is said about Cain in Nod. Genesis 4:16-17 says: “Cain went out from Jehovah’s presence, and lived in the land of Nod, east of Eden. Cain knew his wife.” But that’s not the end of the verse. Verse 17 says, “Cain knew his wife. She conceived, and gave birth to Enoch.”

“Know” in the Bible often refers to sexual relations. That’s very much like our English “intercourse.” The context tells us if it is sexual intercourse or some other kind of relationship. “Cain knew his wife. She conceived.” The context clearly indicates “knew sexually.” Consider an earlier example. “The man knew Eve his wife. She conceived… Adam knew his wife again. She gave birth to a son, and named him Seth” (Genesis 4:1, 25). “Knew his wife again.” No room for doubt. Cain did not find and get acquainted with a wife-to-be in Nod. Rather, in Nod he had sexual relations with her. We have to understand that Cain left his parents with a sister (or niece) as his wife. Cain, and everyone at the beginning, had to marry a close relative. There were no non-relatives around.

Isn’t That an Incestuous Marriage?

An incestuous marriage is one involving two closely related individuals. Who is closely related? This varies by time and place. A complete definition of “incest” clarifies that the specific relatives prohibited from marriage depends upon the applicable law or the religious and social standards of the place. What is considered an incestuous marriage in one state or country is not so considered in another.

Cain and his wife do not fit the definition of an incestuous marriage. There was no law prohibiting such marriages at the time. There was no divine law on the subject until the time of Moses thousands of years later. Leviticus 18:6-18 lists numerous close relatives who are prohibited from having sexual relations. That is understood to be in or out of marriage. That’s the first time in Scripture we read such prohibitions.

Nor does the OT give the slightest hint of other religious or social objections to marrying close relatives prior to the time of Moses. The most outstanding example of such a marriage before Moses is the great man of faith, Abraham, who married his half sister. “She is indeed my sister, the daughter of my father, but not the daughter of my mother” (Gen. 20:12).

A major reason for avoiding incest today is the problem of inbreeding, with the likelihood of producing offspring with serious genetic defects. However, a person does not need to be a scientist to assume that at the beginning of the human race there were no genetic defects to pass on, that such defects resulted from mutations over time as the human race expanded.

In short, Cain’s marriage to his sister (or niece) was not incest. Such marriages by Cain, Seth, and others was the only way to propagate the human race after God created Adam and Eve. The children of Adam and Eve were not under any legal, social, or religious restrictions on marrying close relatives.

There are many questions that arise from the Bible for which we will have no answers this side of heaven. However, there are many other questions, like these regarding Cain and his wife, that only require a minimum of digging to come up with satisfactory responses. Let’s dig into the Word!

Tags:Sound Doctrine: Various
previousInsight #280 — What Is the Church?
nextInsight #282 – A Gender-Neutral God?