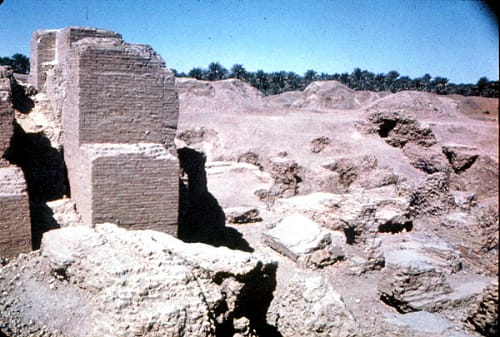 How would Nebuchadnezzar have reacted to an American tank rumbling down the street of Babylon? “Is not this great Babylon,” he had said, “that I have built… for the honor of my majesty?” (Dan. 4:30). Yet, from the second to the twentieth century, the majestic city of Babylon lay in utter ruins, fulfilling Bible prophecy.

The rebuilding of Babylon began in the late 1970’s as a tourist and archeological attraction. However, the eight-year Iraq-Iran war (translate Babylonian-Persian war) changed that, as did Israel’s preemptive air attack on a nuclear reactor near Baghdad. The rebuilding of Babylon became more of a national symbol against Iran and a symbol for uniting Arabs against Israel. Saddam desired to repeat Nebuchadnezzar’s exploits.

However, Saddam’s invasion of Kuwait in 1990, followed by the Gulf War and the UN trade sanctions, brought a halt to the rebuilding of Babylon. Since then, nothing has been done there except to complete Saddam’s umpteenth unused palace. Now with Saddam Hussein ousted, and Iraq in such dire straits, it is difficult to envision any further rebuilding in the near future. Indeed, since the rebuilding was more a cult of Saddam than anything, it may now be a thing totally of the past.

How much of Babylon did Saddam rebuilt? What does all this mean for Bible prophecies about Babylon? Such questions will be explored in the next several Insights.