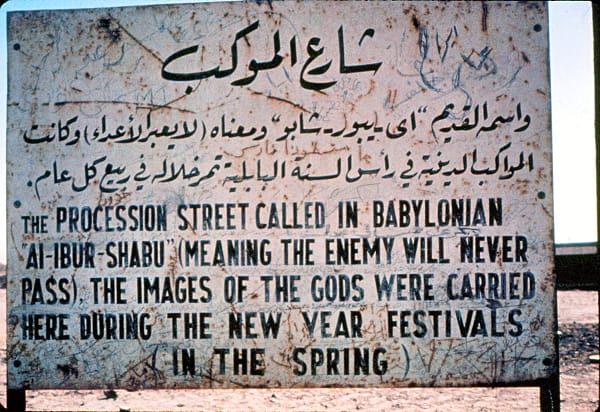 If Saddam Hussein had really wanted to reconstruct the ruins of old Babylon into a real city, he surely would have done much more. Eighty-five miles west of Baghdad, between 1998 and 1999, Saddam built a brand new city, Saddamiat al-Tharthar. During the same years, the rebuilding of Babylon was on hold, supposedly because of lack of funds since the Gulf War.

Saddamiat al-Tharthar has a restaurant, parks, and stadiums, in some ways similar to what was done in Babylon. However, very unlike the rebuilding of Babylon, the new city has hospitals and over 600 homes! Though small and built as a vacation resort, it is much more of a city than anything done at the ruins of Babylon.

In fact, perhaps the outstanding thing Saddam did at the ruins of Babylon was to build yet another of his many lavish palaces on a man-made hill overlooking the ruins and reconstruction of Babylon. Like Saddamiat al-Tharthar, this palace was completed after the Gulf War, while nothing new was done to the ruins.

The Bible says Babylon will never be inhabited again. In Insight #77, I showed that various prophecies, such as Jesus not opening His mouth at His trial, cannot be taken in an absolute fashion. While Babylon literally had no inhabitants for hundreds of years, at other times some people have lived on the site.

The most remarkable thing, from a Bible-prophecy viewpoint, is that in order to construct the palace, a small village of about one thousand people was destroyed and the inhabitants expelled, who knows to where. While many people point to Saddam’s labors as being a rebuilding of Babylon, the opposite is the truth. As far as a real city is concerned–where people live–the information available indicates that Saddam made Babylon less of a city than it was before he began his reconstruction.