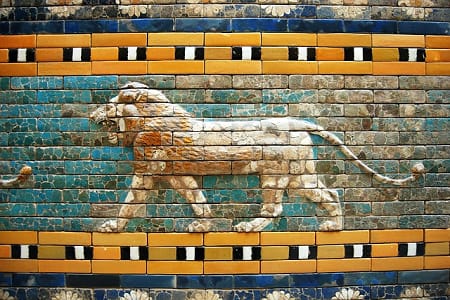 According to information I have read, the Babylon that Saddam rebuilt in the 1980’s included three ancient temples, two ancient gates, the walls of Nebuchadnezzar’s Southern Palace open to the sky, some other walls, a section of an ancient street, and a replica of an ancient amphitheater. In addition, he built two other theatres, two museums, one or more souvenir-gift-book shops, a guest house, fast-food restaurants, cafes, and one of Saddam’s many palaces. That makes a total of perhaps two dozen structures–not much of a city, especially since the  restaurants, museums, and theatres seem to be closed more than open. Moreover, there are still plenty of heaps of ancient ruins.

It may be that Saddam had intentions of eventually transforming the ancient ruins into a great city. However, what he accomplished in the 1980’s, before the Gulf War halted the reconstruction, was certainly not the makings of an ordinary “city.” I have found no evidence of plans or construction of houses, hospitals, clothing stores, grocery stores, drug stores, normal streets, municipal offices, office buildings, schools, mosques, or factories. In other words, no “city” was being built.

The terms used to describe Babylon today are “partially restored ruins,” “forlorn tourist site,” “archaeological site,” “biblical site,” “park,” “theme park,” and “Disneyfication of archaeology.” Babylon, as a viable city, definitely was not being rebuilt. Who knows but what Almighty God put a stop to what Saddam was doing before he advanced too far.