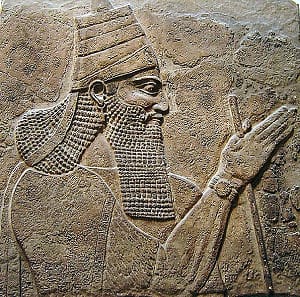 Hardly known for humility, Saddam Hussein had thousands of statues and posters of himself placed in every corner of Iraq, including a huge portrait of himself and Nebuchadnezzar at the entrance to the ruins of Babylon. This not being enough to satisfy his ego, Saddam copied Nebuchadnezzar by having his name and praises inscribed on countless bricks used in the rebuilding.

One repeated inscription reads: “This was built by Saddam Hussein, son of Nebuchadnezzar, to glorify Iraq.” Of course, we know whom the glory was meant for. And yes, Saddam is a true son of the tyrant Nebuchadnezzar who declared: “Is not this great Babylon, that I have built …by the might of my power, and for the honor of my majesty?” (Daniel 4:30). The Creator of the universe immediately sent him to eat with the beasts of the field.

Now that Saddam is in hiding and on the run (if not dead), his inscribed bricks have become collectors’ items, much like pieces of the Berlin Wall. Not only do the bricks make treasures for souvenir seekers, but the caretakers of the ruins are tearing down Saddam’s walls. Modern archeologists frowned heavily upon him for building on top of old ruins. “We vowed to remove his name when he left the throne,” said Babylon’s museum director.

In short, Saddam’s rebuilding of Babylon ceased with the Gulf War; and what he did rebuild is being carried off since the recent war. God is not mocked. God had said, “Babylon shall become heaps” (Jer. 51:37). He also said of Babylon, “You shall be desolate for ever” (Jer. 51:26). Saddam Hussein was on the road to changing that; but he was stopped in his tracks. Much of Babylon remained in ruins. Saddam was not rebuilding a city. He was rebuilding an archeological site–and even those efforts are being torn down.